Women and Politics in Kenya 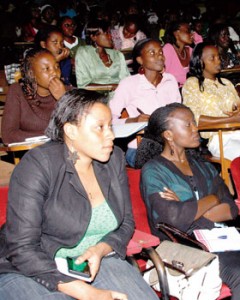 Rachel Shebesh, a member of Kenya's parliament whose political career was inspired by taking part in The Landmark Forum, talks about what it will take more women involved in Kenyan politics. Rachel Shebesh, a member of Kenya’s parliament, recently gave a speech on ‘Women and Politics’ and Kenyatta University that was covered by The Standard, a Nairobi newspaper. In the article Shebesh notes that taking part in The Landmark Forum served as the impetus for her to get involved in politics. Shebesh’s speech was a call to action for other women to get involved, and discussed what barriers women face in Kenya in breaking into a traditionally male domain. The article is abridged below – visit The Standard’s website to read the entire story.

Kenyatta University was last weekend packed with young men and women who sought inspiration from the powerful speakers lined up for them.

To crown the occasion was Rachel Shebesh — ODM nominated MP, who impressed the female students by patiently sitting through the entire session, which was a show of humility and concern for them. She spoke on ‘Women and Politics’ and attempted to convince the young women to get into politics.

“More often than not, women are discouraged from joining politics because women in politics are subjected to all kinds of insults. They are called prostitutes, divorcees…all kinds of names,” she began.

Until she began her political career, Shebesh was a well-to-do fashion designer, although the thought that she could do more kept bugging her. But it was not until she attended the Landmark forum that she realised she wanted to do something bigger with her life — and it had everything to do with influencing policy and the decision-making process.

After the life-changing forum, Shebesh was sure she wanted to join politics. She began her political career as an usher in the political meetings. She then moved on to being a secretary, then the master of ceremony until they finally accepted her as an official of the party.

According to Shebesh, tokenism, which has for a long time defined women’s role in politics, has caused women not to be taken seriously by male counterparts since the seats were literally handed over to them.

However, as Shebesh opines, the new Constitution has set in place the necessary guidelines to create a fair playing ground for women and men in politics.

“[The new Constitution] states that women and men have a right to equal opportunities across the board, especially in politics,” she said, “Women in politics will no longer be defined on the basis of tokenism. It has now become a fundamental right for women to engage actively in politics.”

Shebesh called for a paradigm shift that will see a change of the societal perception as far as gender roles are concerned.

“We are 22 women in Parliament and we still find ourselves outnumbered — we need more women to come on board,” she said.

Shebesh encouraged women to be issue-based, encouraging them to be specific on the issues they advocate for, as opposed to being ‘all over the place.

She offered: “Listen to yourself. Don’t listen to the voices around you. When you are busy doing other things, you might miss that still voice inside you that is supposed to guide you.”

With the new Constitution, Shebesh observed that women have many opportunities, especially because of the two-thirds principle that gives them a leeway to actively participate in the politics of the day.

“The new Constitution provides for the county governments — which are a replica of the government of Kenya. With these counties, there are opportunities galore for us women,” she remarked.

She warned against living life with a ‘straight jacket’ — restricted by societal expectations and limitations.

“Don’t live your life with a straight jacket; saying I am a woman, I must do this because society says so… be different and take advantage of the opportunities in your hands,” she remarked.