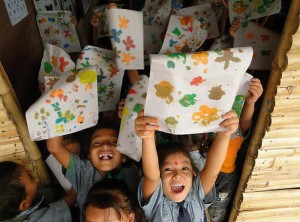 A Washington state native held a speed dating event and a concert to raise money for the orphanage her cousin founded in Nepal - now she is heading to that country as a volunteer. As her project in Landmark Education’s Self-Expression and Leadership Program, Julia Baggenstos held two fundraisers in Seattle for the Kopila Valley Children’s Home, an orphanage in Nepal, one of which was a concert and the other a speed dating event.

According to an article in The Fremont Komo, she was inspired by her cousin Maggie Doyne, who founded the children’s home several years ago as a teenager after saving up thousands of dollars in babysitting money. Baggenstos is now heading to Nepal to spend three months volunteering at the orphanage.

Baggenstos’ cousin Doyne founded the orphanage and the Kopila Valley Primary School, both are which are a part of her foundation, BlinkNow, which is where the money from the fundraisers went to directly. Doyne and BlinkNow have been featured in The New York Times and other major media.

Said Baggenstos about her cousin: “It’s people like Maggie that make all the difference. I am taking a stand for the children of this world, and I am committed to making a difference in their lives.”