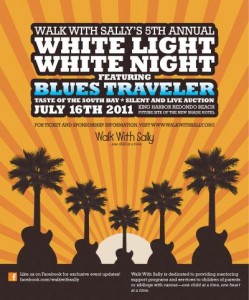 Walk with Sally, an organization created by Nick Arquette in 2005 when participating in a Landmark Education Program, is making an ever-expanding difference with families affected by cancer. Walk with Sally, an organization that matches children with parents with cancer with mentors who have been through the same thing, and which was started by Nick Arquette in 2005 when he took part in a Landmark Education’s leadership program, just held its fifth annual summer fundraiser, bringing in approximately $200,000. Called White Night White Light, the event took place July 16th in Redondo Beach, and featured the Music of Grammy award winning band Blues Traveler, the ‘Taste of South Bay’ – upscale fresh cuisine supplied by 20 local restaurants, and a silent and live auction.

Walk with Sally focuses on providing children whose parents have cancer someone they can talk to who has had the same experience – Arquette created the organization in honor of his mother who died of cancer when he was 16, and he relates that having someone to talk to in that situation can make a huge difference.

For more information about Walk with Sally and their mentoring and support services, visit their website and watch the video below.