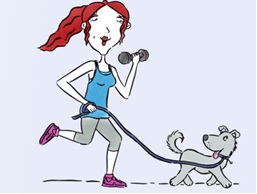 Landmark graduate Steve Hayes has used his talents to make a difference with thousands of people. Now he's doing so through a powerful character that he draws.

The following is a profile of Landmark Forum graduate Steve Hayes

With his mother’s encouragement, Steve Hayes began a career as an illustrator while still very young.  He enjoyed drawing and his mother provided rudimentary tools of the trade and appreciation for Steve’s talents. When choosing a major at Miami University art was the obvious choice.  Armed with a Bachelor of Fine Arts degree and knowledge of graphic design, painting and drawing, Steve became an illustrator for Gibson Greetings.  He crafted a personal and professional style creating hundreds of greeting cards.

He left Gibson and began working for several design studios as a layout artist.  Then Steve participated in his first transformational program.  This marked a complete alteration in his life.  He realized that everything he’d been attempting to get to, fix or change was over.  For decades he has been making  a difference for others, becoming a leader of the Self Expression and Leadership Program.  He led more than 25 programs for thousands of people.

Professionally Steve struck out on his own, freelancing, creating fresh characters along the way.

Steve worked with many amazing people over decades, including many extraordinary women.  His experiences helped form a timely new character, the embodiment of full selfxexpression. She enjoys her life and leads it with integrity and courage. She is an ordinary woman with extraordinary virtue, one who values her own life and allows for expression for herself and for those around her – Veronica.

Steve credits his own mother, Joyce, as a driving force behind Veronica. She was a strong tough loving incredibly powerful woman and Veronica reflects her values. Steve observes that our natural tendency is to NOT want to be who we are. The character of Veronica appreciates herself and the value she can add to the world. She’s relatable. Veronica loves life.  She enjoys and respects her friends and the world around her. Veronica greeting cards has added a clothing line. In 2013, Veronica was licensed to Lur Apparel. It is a marriage of two great ideas. “Lur” means beauty, fashion, sustainability, and people making a difference in the world. The company is lean and green, paying living wages for its workers in Guatemala, transforming the sweatshop mentality and creating workable situations for employees and customers.  The company is committed to women’s self-expression and value in the world.

Veronica is now “Spokes Diva” for Lur Apparel. Check out Veronica for yourself at http://lurapparel.com/Our-Clothing/Veronica/