A Commitment to Bring Spaceflight and Prosperity to India 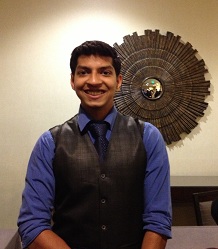 When a smallish, unassuming looking young man from India walked up to the microphone to share something while taking part in Landmark Education’s Introduction Leaders Program, about half the room is paying attention. He turns on the light of his 1000 watt smile and quietly says in heavily Indian accented speech:

By the time the words are out of his mouth, even those who don’t yet know him have realized there is something very special about this young man.

Back in August when the program started, Shubham claims he signed up simply to help make himself the best leader he could be for his future companies, but he says that along the way he saw an additional opportunity to further assist his homeland of India. Soon after the course began he sent an email to his fellow program participants:

“So last night I cried myself to sleep. I am so frustrated right now. My country is suffering everyday. There are more and more brutal rape cases. People are dying becasue of lack of pure water. Millions are sleeping without food every night, and I don’t know what I can do. It feels like whatever I am doing isn’t fast enough. I feel helpless being all the way on this side of the Planet! How can science feed my country? I don’t know and I don’t like it! I am tearing up while writing this post itself. I don’t know what it will take, but I am going to pick up my pace of work. I declare to all of you:

1. I will raise a million dollar investment for zero gravity flights before the end of this program

2. I will buy my first airplane for a zero gravity flight by the end of the year.

3. I will get in partnership with X-Prize India which is organizing a $6 million prize for a radical breakthrough in living conditions in India.”

According to Shubham, his idea is to take a multidimensional approach to reforming his beloved India.

He says that there is a surprising amount of technology already in place in his country that has been developed over just the past 20-30 years, but since gaining the reputation of having cheap labor, India has been losing the scientists and other educated workers needed to either European countries or the U.S. where they can get paid much better. His goal is to bring more outside private technology companies into partnerships with Indian companies (even if he has to start some), technological awareness, and a ‘space culture’ in the form of public amusement type centers where real people can get the space experience.

An example would be a space theme park with a space themed spa and hotel.  By transforming the public image of his country from one of cheap labor  to a ‘brain country’, he hopes to bring more money into India and the space industry, resulting in higher pay for its workers.

India’s plans for this ‘space culture’ include 51 missions and a probe to Mars.

He also wants to bring zero gravity flights for the sake of research and microgravity experiments to India by forming partnerships between American companies who do this and his newly formed Indian company.

He is in the process of forming an alliance between himself and a corporation that has agreed to put up $6 million for a radical breakthrough in living conditions using technology.

At the end of last September, he established a Space Tourism Society chapter in India, and was appointed the liason between India and the U.S.

He also is working towards bringing The Landmark Forum to even more people in his country to bring awareness of the power of each of their individual greatness, and help them learn their futures can be truly unlimited.

He claims he will have his new company up and running by February 2013 in partnership with a company in India to execute all the opportunities he is able to create in the U.S., and his goals for the end of 2013 include having his zero gravity flights up and running.

Michael Berman,who is also in the course with Shubham, says that he “has an amazing passion for his Homeland and is unstoppable in the face of no agreement”.

Shubham says that in the Introduction Leaders Program, he has learned that in order to win you need to play the game as though your life depended on it, but at the same time put no significance into it.  His example is that children playing, play with everything they have – then go home.  He says his goal is to “Play the game like your very survival depends on it – failure not being an option – but don’t be significant about it.”