Start Me Up Project to Build Needed Facilities 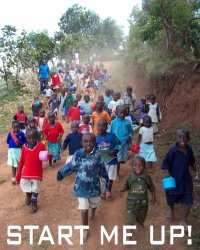 A Slovenian newspaper highlights an innovative project to build needed facilities in Africa - created by Urška Torkar and worked on in her Landmark SELP program. The Slovenian News paper Žurnal 24 has written a story profiling a project worked on by Urška Torkar in Landmark Education’s Self-Expression and Leadership Program to apply creativity to building hospitals, schools and shelter in the developing world. Much of that story appears below.

Start Me Up Project – Student to build schools, hospitals and shelters.

Urška Wants to Build in Africa, Asia and South America

24-year-old architecture student from Bohinjska Bela has transformed her BA dissertation into a global project aimed at encouraging the construction of much needed facilities in Africa, Asia and South America.

She got the idea while traveling across Uganda and Rwanda. What she saw there sparked her creativity towards designing a specific project for which she would contribute plans – instead of money – for the cheaper and simpler construction of hospitals, shelters, orphanages and schools.

“In my travels, I have noticed many people sitting on the pavement every day doing nothing. They have no job or education, their government takes no action and those resigned to their fate do not need to make any effort as the Western world sends them support but doesn’t encourage them to work. Therefore, my supporters and I have decided to encourage the people of those countries with the Start Me Up Project so that, by cooperating in the construction work, they can change their lives for the better and reinforce the idea that they have contributed to the construction of a shelter or hospital”, Torkar told the daily Žurnal.

The project will first be implemented in Kyanamira, Uganda, and will then hopefully be extended to other developing countries. As Urška emphasized, they will not raise funds directly – instead, schoolchildren will draw pictures and make interesting toys and other crafts which will then be sold in London. “As I have experienced tsunamis, earthquakes and wars during my travels in Africa and Asia, I decided to design in my BA dissertation buildings that are as cheap and simple as possible so that they can be quickly built using local materials,” she explained.

The funds for the first project are already being raised, while Torkar also receives support from her friends in Slovenia and Barcelona and social worker Richard Tusasibwe, who heads the project in Uganda. “We need help in organization; we are looking for a sponsor to pay the shipping expenses for the aforementioned children’s products and are also seeking volunteer architects. In short, anyone who is interested in the project is most welcome,” added Urška, who will spend her time until mid-September between London, Slovenia and Barcelona. In the meantime, her creative energy has taken her from architecture into the field of photography as well.

Student Urška Torkar is taking a three-month international Landmark Education course in London, while in Ljubljana she is working on completing her architectural studies. Once she has obtained her diploma, she will focus on the Start Me Up Project and on photography.

Today, at 2 p.m., a public presentation of the Start Me Up Project will take place at Speaker’s Corner in Hyde Park, which is also to be attended by representatives of the Ugandan Embassy. The organizers will sell products made by Ugandan children and present the improved methods of construction to be used on the new buildings.