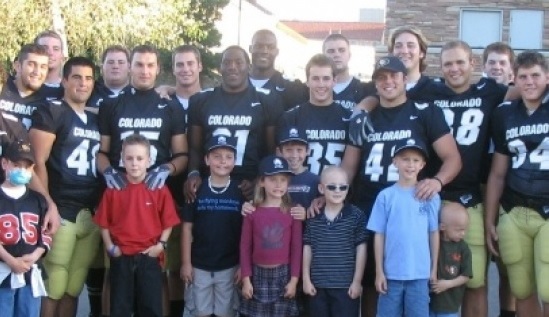 Special Spectators, which connects serious ill children with top athletes and events, is expanding its reach with a new crowdsourcing campaign.

What follows is an update about Special Spectators, the project created by Blake Rockwell in his Landmark Self-Expression and Leadership Program in 2002. Over that time, Special Spectators has had more than 8,800 serious ill children and their families attend about 330 sporting events. Rockwell is now launching a crowdsourcing campaign to reach thousands more children. Here is Rockwell’s update: Calling on its extended network of supporters, participants, friends and family, Special Spectators has launched its first far-reaching fundraising campaign, using CrowdRise, the world’s top fundraising platform dedicated exclusively to charitable giving. Over the next two months, the organization aims to raise $130,000 to fuel its goal of serving thousands more seriously ill children nationwide during its upcoming 2016 College Football Season, which will be the organization’s 15th operating season. Since its founding, the organization has operated on a remarkably lean budget, with no paid staff, relying solely on periodic donations and in-kind support to activate season after season, often delivering as many as 50 VIP Game Day experiences to seriously ill kids and their families in local communities all around the country. Special Spectators already serves more than 800 patients, parents and siblings each season — but 2016 is a turning point. From this point forward, we aspire to serve thousands of children per year, during all the sports seasons, not just football.

Those who know us know that we are motivated by the sole purpose of bringing the joy of Game Day to children who would otherwise not have such an opportunity, one that we sports fans tend to take for granted. As we like to say: we all know the joy of Game Day. Nothing equals it. NOW, imagine if Game Day were the absolute BEST day of your life.

We are excited to team up with CrowdRise, whose community was named a “Top 25 Best Global Philanthropist” by Barron’s and whose tools are helping bring our fundraiser to life. You can check out our fundraiser and full story here. Please take a moment to donate and share with your own circles. As the word spreads, so does the promise of more and more joy for our children this coming season and beyond.