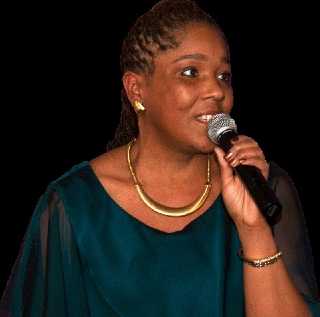 A Landmark graduate is using her traumatic past as an opportunity to make a difference for others.

Kari Kelley often says she is lucky to be alive, but these days she is so much more than just alive. She is an inspiration to those who know her.

The product of a military wife who was raped at gunpoint while her husband was away, she was given up for adoption at birth without even being given a first name since that was for the new parents to give her. Her birth parents wanted her to be able to lead a good life without the painful memories of her conception clouding their view of her, but it wasn’t to be that way.

Kari was adopted the first time by a violent woman and her family who beat and shook her so badly that it was discovered days later her eyesight was badly damaged. In fact, she was declared legally blind.

She was given back to the foster care system only to be adopted once more by another family who was equally violent in other ways. Her mother, Frances, yelled, beat her, and then passed her around to other family members who taught her ways to make herself wanted using her body.

Growing up blind, knowing you are not pretty (she was told she was ugly), and being ‘someone else’s child’ might have been a good excuse for her to have grown up a prostitute, drug addict, or living on the streets. Kari Kelley, however, is none of those.

She has written her life story in a book entitled Black, Blind and Female.

It is a straight from the horse’s mouth, written in plain speech, kind of book that pulls no punches. Her journey from unwanted blind child to finding her place in the world where people would love her is inspiring and disturbing at the same time.

Kari did The Landmark Forum in September of 2013. She says one of the most important things she was able to complete in her life was the new relationship she now has with her adoptive father. It is her work in the Self Expression and Leadership program, however, that is proving to be her claim to fame.

On May 9, she is putting on a one woman show entitled Someone Else’s Child at the Sunnyvale Performing Arts Theater in Sunnyvale, California. She has promised this to be a hard hitting look at what really can go on behind the walls of family. It is her hope that if two people leave her show and go on to protect two children, and those children grow up to protect two more each, the cycle of abuse and violence can eventually come to an end. And, she says, you never know who those two children might turn out to be. They might be the head of an agency that changes the world, or become doctors that find the cure for childhood diseases.

One of her favorite quotes is ‘It’s easier to raise strong children than to fix broken adults’, by Frederick Douglas. Kari says these broken adults then see the world around them as broken and think they are not capable of doing anything or stepping up if they suspect another child is being abused. Some might actually think that is the normal way life is. Starting out with strong protected children from the beginning would ensure no child is ever abused again.

Kari’s goal is to see that the protection of the innocence of children becomes the first priority of every human on earth, so that the world will be a better place for all of us. Her wish is that when anyone suspects abuse, they will not sit by, but instead step up to make a difference in that child’s life.

4 thoughts on “Someone Else’s Child”