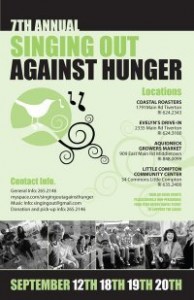 Singing out Against Hunger, originally created by Jane Bitto in her Landmark SELP Program seven years ago to assist the hungry in East Bay, Rhode Island, had its most successful year everywhere. Singing Out Against Hunger, the grassroots community project to alleviate hunger in the East Bay of Rhode Island which was created in 2003 by Jane Bitto in her Landmark Self-Expression and Leadership Program, has set a new fundraising record, with almost $25,000 raised this year. According to The Bridge, the publication of The East Bay Community Action Program(EBCAP), a gift of $22,400 and a large amount of non-perishable food was donated to EBCAP this year through the project.

The musical event is coordinated through local cafes and restaurants one for one weekend each year. Free of charge, the public gets to see a variety of musical entertainments at this various venues, where they also have the opportunity to buy raffle tickets or bid on silent auction items, or donate money or non-perishable food.

Jane and her husband Dominic, who together founded Singing Out Against Hunger (SOAH) and are co-presidents of the organization, own a restaurant themselves which provides one of the musical venues.

Since 2008, the weekend festivities and fundraising have been enhanced by the introduction of a charity golf tournament, which raised $7,800 alone this year.

All of this work has made a huge difference in feeding the hungry and supply local food pantries – according to EBCAP’s Chief Operating Officer, “We would not be able to supply our Newport County food pantries with the types of food that our clients need and deserve without the Singing Out Against Hunger donation.”

Read the full story in EBCAP’s Winter 2010 publication, and read Landmark Education News’ previous story about Singing Out Against Hunger.