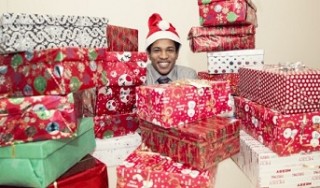 Lauren Giblin’s project in Landmark’s Self-Expression and Leadership Program brought Christmas to the homeless in London. Her original plan was to have 150 shoeboxes full of gifts delivered to five participating shelters in time for the holiday.

Generous donations from employees at Giblin’s company, Freshfields, helped fill the 150 boxes. However, an additional 100 boxes were filled, thanks to gifts given by employees at other nearby companies, such as Google and Financial Ombudsman.

The boxes contained winter essentials such as hats and gloves, as well as other items such as candy, toiletries and playing cards. Billing assistant Joel Hodgson, who had once been homeless himself, partnered with Giblin to fulfill the project.

On December 22, they delivered the first 150 boxes to the shelters as planned, but then had another hundred boxes given by the other businesses. Decked in Christmas garb and aided by a team of young helphers, they distributed those boxes directly to the homeless on the streets.

Joel said they many of the people they gifts to were excited and taken aback. “One guy said it was the first Christmas present he had received in 10 years,” he recalled.

Lauren was moved and inspired by the generosity of the donors and their enthusiasm, saying:

“The personal nature of the gifts and the thoughtful messages people wrote to include in their shoeboxes really touched the recipients. Beyond a sense of gratitude, they felt honoured and respected – a rarity among the homeless community.”

They both plan on expanding the Shoebox Project in 2013, starting with events coming up this Easter.