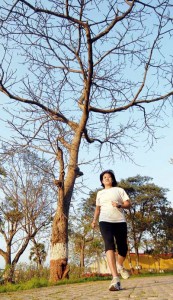 23 runners took part in Mumbai's half Marathon to raise awareness of Indian's Gorkha community and raise money for some good causes. Roshni Rai’s project when she took the Landmark Education Self-Expression and Leadership Program served two purposes – raising awareness of India’s Gorkha community, as well as raising money for a variety of good causes. Rai assembled 23 runners from Darjeeling’s Gorkha community to run in a Mumbai half-marathon, wearing t-shirts saying ‘We are Gorkhas. We are proud to be Indian’.

Rai, a 30-year old legal executive, has lived in Mumbai for close to a decade, still sometimes feels like an outsider – many assume because of her Asian features that she is Chinese, and when she tells them that she speaks Nepali, they still assume she is a foreigner. This led to her project to raise awareness about the Gorkha community in India, who are Indians of Nepalese descent. “I am Indian and very proud of it,” she says.

The runners also raised the equivalent of over $2,000 for three different non-profits. Rai is also planning to assemble a group for  the Delhi Half Marathon next, raising more awareness about the Gorkha community and awareness of the benefits of running in Darjeeling. The whole story can be read at Mumbai’s Mid-Day news site.