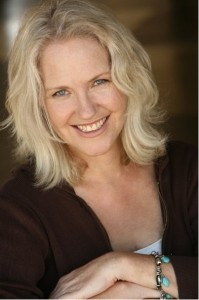 For Landmark Education SELP leader Robin Carlson died earlier this month of cancer at the age of 46.

On January 2, 2011, after a five year battle with endometrial cancer, Robin Carlson, a former leader of Landmark Education’s Self-Expression and Leadership Program, passed away peacefully at the age of 46, surrounded by friends at her home in Los Angeles, CA.

Robin is survived by her beloved father retired Technical Sergeant Donald Ralph Carlson, USAF, and stepmother Dixie Carlson of Colonial Beach, Virginia.  The thousands of people who had the privilege of calling Robin family, friend, colleague, coach, leader, student, or fellow explorer will be forever altered for having known her.

Robin was born April 30, 1964, at Vandenberg Air Force Base, where her father was stationed, and raised in Lompoc, California, where she graduated from Cabrillo High School in 1982.

After high school, Robin fulfilled a childhood dream of becoming a fashion model. The 1988 Super Bowl commercial for Jordache jeans, where Robin makes her entrance on roller skates, made such a stir that Dennis Miller announced on Saturday Night Live’s satirical “Weekend Update” that Robin had been voted the “Most Admired Woman in the World” over such luminaries as Nancy Reagan and Margaret Thatcher. Hard Copy followed suit, naming her commercial spot “the sexiest commercial in America.”

From 1994 to 1996, Robin served as executive assistant to investment banker Richard Blum, husband of Senator Dianne Feinstein, who stated: “Dianne and I were very saddened to hear of Robin’s passing. She was a great lady. Even though she worked here as my assistant over a decade ago, I will never forget her gracious contributions. We will sincerely miss her.”

In 1996, Robin settled in Los Angeles, where she held various positions in the entertainment industry, working for Capitol Records, Warner Brothers and Disney.

In 2000, Robin made her first trip to Bali with the Glendale Community College Study Abroad program and fell in love with the Balinese people. Soon afterward, she started a clothing import business. Her line of clothing used traditional methods of hand-dyeing and printing, and her business model supported Balinese craftspeople by allowing them to work from home, where they could care for their children and earn fair wages. The business eventually became the Gado Gado apparel company, which continues Robin’s tradition of strong business ethics and giving back to the community and has been sold in over 500 boutiques nationwide as well as large retailers such as Nordstrom’s and Dillard’s.

From 2003 to 2005, Robin was a Self-Expression and Leadership Program  Leader for Landmark Education, training people from all walks of life to create and establish community projects that make a lasting difference in the world.

Diagnosed with cancer in 2005, Robin served for several years as a Legislative Advocate for the Cancer Action Network (ACS CAN), the nonprofit, nonpartisan advocacy affiliate of the American Cancer Society, which supports evidence-based policy and legislative solutions designed to eliminate cancer as a major health problem.

During the 2008 US Presidential primary, Robin campaigned for Hillary Clinton and was a floor delegate to the 2008 Democratic National Convention. She was a west coast spokesperson for Hillary Grassroots Campaign and a leader in the Puma PAC movement.

A celebration of Robin’s life will be held in Los Angeles on Sunday, February 6, at 12:00 noon, at the New Center for Psychoanalysis, 2014 Sawtelle Blvd. A plaque will be placed beside that of her brother Donald at Lompoc Evergreen Cemetery.