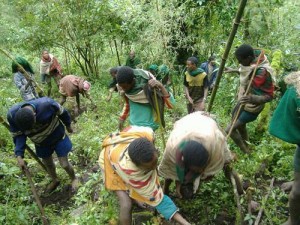 Gashaw Tahir was recognized by the UN as a private sector green hero for the reforestation work he has accomplished in Ethiopia. Gashaw Tahir has been recognized for his efforts at reforestation in Ethiopia by the United Nations Environmental Program. Tahir, born originally in Ethopia, came to the United States and took The Landmark Forum a number of years ago, where he said he gained ideas and tools to make a difference. He returned to Ethiopia and found the area he grew up in badly deforested.

He spent his time and money doing something and was awarded 40 hectacres on which he developed a tree nursery and formed the Greenland Development Foundation. He has already changed the surrounding landscape significantly with the planting of many thousands of trees, liberally disseminating the nursery’s saplings free of charge, and in the process given jobs to 300 unemployed and/or orphaned youths.

In recognizing Tahir as a Private Sector Green Hero, the United Nations said that he was “awarded a top prize in the private sector category in this year’s National Green Awards”.