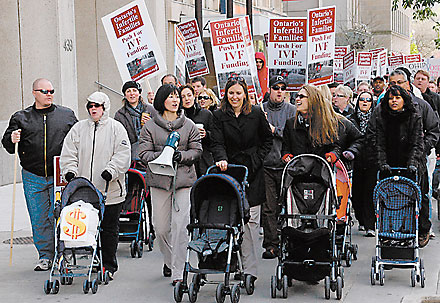 Joanne Horibe leads Landmark Education's Self-Expression and Leadership Program. As a project she undertook inside of that course, Horibe teamed up with Ashley Bulley and Kerri Stanford to lobby the Ontario government to include in vitro fertilization as part of its OHIP coverage.

Joanne Horibe leads Landmark Education’s Self-Expression and Leadership Program. As a project she undertook inside of that course, Horibe teamed up with Ashley Bulley and Kerri Stanford to lobby the Ontario government to include in vitro fertilization as part of its OHIP coverage. They created an organization called Conceivable Dreams, and as her project, Horibe spearheaded Pram Push, an event held last Mother’s Day where about 200 protestors pushed empty baby prams on a march to Queen’s Park in Toronto. Inside Toronto tells the story.

April Hoyt has been trying to get pregnant since she was 21. Wanting to be a young mother, she married in 1994 and was eager to start a family. But after being diagnosed with poly-cystic ovarian syndrome (PCOS), her odds of conceiving were eight per cent. She was told her best option was to have in vitro fertilization, something she couldn’t afford then or now.

It is estimated one in six couples in Canada, and worldwide, have fertility issues.

But Horibe decided she couldn’t stand by and allow her hopes of becomming a mother fade away and did something about it.

Last November, Horibe, along with Ashley Bulley and Kerri Stanford, founded Conceivable Dreams: the OHIP for IVF Coalition, a grassroots organization formed to lobby the Ontario government to expand OHIP coverage to include in vitro fertilization (IVF).

They hope to raise awareness and to create a community that’s speaking up so people don’t feel alone. Horibe said it can be an isolating, emotionally taxing experience with a perception of ‘what’s wrong with me?’

“People are embarrassed and ashamed and they’re not speaking up,” Horibe said. “For me that’s one of the big things is shifting the conversation so that it’s not something anybody is ashamed or embarrassed of, but viewed like any other medical condition.”

This past Mother’s Day they held their first big event, a Pram Push that saw 200 women and their loved ones march to Queen’s Park – some pushing empty strollers to signify the babies they can’t conceive.

“There were people there who have been trying for 10 or more years who said ‘our doctors tell us that IVF is the answer and we cannot afford it,'” Horibe said.

Hoyt was told for someone with PCOS she would need at least three cycles of IVF with a price tag of $30,000. In 1999, her father said he would help her up to $30,000 and decided instead of doing three IVF cycles with no guarantees, to use the money to adopt a baby Diana Kazakhstan.

Until 1994, all of IVF treatment was covered other than the medications and embryo freezing said Dr. Ellen Greenblatt, head of the division of reproductive sciences, department of ob/gyn and the medical director of fertility and IVF services at Mount Sinai Hospital.

Based on a Royal Commission Report that came out in 1993, the service was d-listed a year later: “because there was no evidence-based medicine to support IVF for anything other than bilaterally-blocked tubes, and that was their argument,” Greenblatt said.

She said infertility is not a choice or a lifestyle, but a medical condition, and many couples who can’t afford the money for IVF often have to put their attempts aside.

“Pregnancy rates are very strongly related to the age of a woman so fertility declines as the success with any form of assisted reproduction with increasing age, so when patients put off their attempts because they’re trying to save money, over time it negatively impacts their likelihood of succeeding,” Greenblatt said.

Hoyt, now 36, said when she was first diagnosed with PCOS they didn’t know as much about the disorder as they do now, and today they’ve given her a 50 to 60 per cent chance of conceiving with IVF. She said it’s frustrating to know what stands in her way is money.

“We don’t have 15 grand to waste on a possibility…the way I look at it is if my heart or lungs weren’t working OHIP would pay for it, my ovaries aren’t working so why isn’t OHIP paying for it?” she said. “It’s a medical condition, why isn’t it being treated like one?”

Greenblatt said she finds it curious that the healthcare system does cover other treatments like stimulation and insemination, which are much less successful on a pregnancy rate per cycle, and associated with a higher risk of multiple pregnancies.

“Most of our multiples, I would say, come from treatments other than IVF so it would actually make sense to fund IVF coupled with more control over the number of embryos, creating more effective pregnancy rates, better pregnancy rates and lower multiple rates,” she said.

According to Greenblatt Canada is behind compared to most first-world countries, many in Europe, where the procedure has coverage.

“In Sweden, when they began funding it, they funded it coupled with decreasing the number of embryos transferred because we know one of the complications of IVF is multiple pregnancies, which is both very costly for our healthcare system and social services, but also has significant short and long-term health risks for the children and the mom,” Greenblatt said.

Quebec recently tabled a bill to publicly fund three IVF cycles and they already provide a tax credit up to $6,000.

Even still, statistics show if a woman does three cycles her chances of getting pregnant are about 50 per cent with no guarantees.

In 2008, Premier Dalton McGuinty convened an expert panel on adoption and infertility, which is going to make its recommendations this coming June. Both Horibe and Hoyt said they’re hopeful the panel will support some IVF funding.