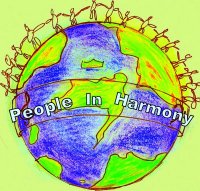 A leading New Zealand blog has inverviewed composer Andrew Correa, discussing his People in Harmony concerts which are taking place on March 21 as part of International Race Relations Day and which is Correa’s project in Landmark Education’s Self-Expression and Leadership Program.

Renee Liang, a writer for The Big Idea, a popular blog for artists and creative people, discussed the project with Correa, who said that People in Harmony was about brining people together and celebrating the rich multicultural heritage of Auckland, New Zealand.

Specifically, Correa is assembling groups of amateur performers from a wide range of cultures and musical styles to perform two concerts on the 21st. He has already put together a number of performers from Turkey, Sri Lanka and India. He says that as long as they can provide their own equipment and play, the event is open to performers from the entire community. In the interview, Correa talks about getting outside his comfort zone and making a difference:

“There’s nothing like taking on a challenge bigger than yourself – it’s the best way to make your personal struggles insignificant and forces you to think outside the box about how you can make a difference in the world.”

Correa sees the possiblity of this becoming an annual event – or perhaps developing ongoing lessons or workshops for the entire community. He also acknowledges Stephanie Dallow of Kids4Drama for her extensive logistical support of the event, which is putting on its concerts at 4pm and 8pm on the 21st, at theThe Blockhouse Bay Community Centre, 524 Blockhouse Bay Road, in Auckland. To reserve tickets, email Correa at [email protected]

Read the entire interview at The Big Idea.