Peace and Love on Haight 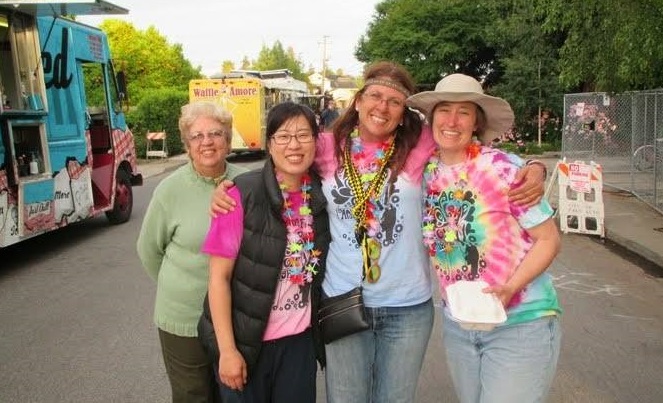 Gizela Sipos had a desire to really be a part of her community – called “The Willows” – as opposed to just living in it. Being a childcare provider there, people trusted her, but still, most of the residents did not really know each other.

During her Self-Expression and Leadership program at Landmark in San Jose, she decided that perhaps there was a project to be done close to home. She started by sending an email to all the neighbor groups she had addresses for. In her email, she set up a time where anyone interested in a community event could meet at the local coffee shop at 10 am Saturday.

Initially, she had many responses, but when 10:00 came around no one was there. Ten minutes later her neighbor who lived three doors down walked in the door, and the two of them began a conversation for what was possible. Gizela shared the idea with her for a block party as a way of bringing together and uniting the community, and the neighbor loved it.

Her next step was to go door to door having face to face conversations with almost everyone in her block and a half area. For those not at home, she left a post it note on their door that said “Hi, my name is Gizela. I live on Haight Street and I am considering putting a block party together. I would love you to come and attend the meeting on Wednesday.” Although she doubted anyone would actually come, according to Gizela the extraordinary thing was that she was beginning to meet and get to know her neighbors. Much to her surprise, when Wednesday night came, Gizela had 15-20 neighbors show up. She shared her Landmark experiences with them as well as her ideas for the project to bring together the many generations living near her; from babies to retirees. Her main idea was to have Haight Street host “The Willows” block party, not just for her neighbors on Haight street, but for the entire neighborhood of over 3,000 people. Her newly formed team loved it.

They began in March with many ideas but no money for the project. The first business she decided to have an enrollment conversation with was a local preschool to see if they were interested in contributing funds  for a tie dye station. She then went to three others, and they ended up contributing a photo booth, face painting and a magician – the project was taking off.

The rest of her team started asking for contributions too. A momentum took hold – once the preschools said yes, the local market said yes, and the the local café, hair salon, the dry cleaner, local spa, florist and their bakery. Several businesses began with a wait and see attitude, but have since contacted her to definitely be a part of the event next year. According to Gizela, the meetings were full of excitement and electricity, and the atmosphere was contagious. The project Gizela initially started from absolutely nothing just ran like wildfire. She was completely inspired by all her volunteers, their ideas and energy, and they told her that she inspired them. One neighbor across the street said she had just had her concrete driveway done, and she wanted to contact the contractor to see if they might contribute porta potties for the event, and on the day of the event there were three porta potties and wash stations ready to use. Another neighbor had a friend that contributed free graphic designs for the t-shirts, flyers and banner.

Another neighbor across the street was in emergency services so she set up a first aid station, and the police And fire departments came to join in The neighbor who got the potties donated also got her realtor to donate a dunk tank and both Menlo Park mayor Ray Mueller and principal Laura Creighton were good naturedly positioned in it as targets. Another neighbor had a college age son who was friends with members of the Stanford University basketball team, and they agreed to do a basketball clinic for kids at the end of the street.

Not everyone was initially on board, but through her tenacity to get to know each and every one of them, she finally met and personally invited all her neighbors. Nothing could go wrong for this event–when the Stanford basketball players cancelled, the neighbor across the street offered to get in touch with her friend who was one of the actual trainers for the Golden State Warriors professional basketball team, and the clinic happened. When an older neighbor at the end of her street voiced his resistance and concern at having his street blocked off, she invited him to bring his questions and concerns to the next meeting. She says because of the project, she made a new friend that night.

Other political folks were invited as well. Gizela said her group of volunteers was so bold that nothing was too big to ask for. She said she herself would never have found the courage and self-expression to go door to door to get it started if it weren’t for them. Gizela asked Sunset Magazine to sponsor the event, and they did. As the event neared, they realized they had not gotten a clean up crew but when she invited one of the moms from the day care, she offered the idea that junior high school kids need community service hours to earn points to go to Raging Waters, and thus a clean up crew was created.

The day of the event they collected quite a bit of money from the dunk tank. It was donated to the VA resource library, with $500 alone going to a program to help women veterans prepare for jobs interviews by getting manicures, pedicures and their hair done. It was designed as a way to assist in their transition from military life back to civilian so they could feel and look their best for job interviews. On May 17, 2014, from 3-7, “Peace and Love on Haight Street” finally took place. There were tables and chairs, flowers for the tables, three food trucks – everything was donated. Gizela said she had started with four preschools and shared it with her group and suddenly they all went out and started making requests–they were unstoppable. She even had a team of volunteers design flyers and t-shirts and a Facebook page. The way it all took off, she said was incredible. They had music and dj’s and neighbors that came out of the woodwork to contribute, including 15 minutes massages, a BeeLine bike repair station, a kid station, and several bounce houses. Best of all, it was all free.

Since then, neighbors have all come up to her to ask when the next one will be.  Because of the growth and the magic to let the project happen however it turned out, the volunteers decided to make it an annual event.

One neighbor said in his email to Gizela “Thank you for adding ‘community’ to our neighborhood. Studies show time and time again that when a neighborhood bands together crime goes down, and quality of living goes up. Really appreciate your help!”

A short time after the event, she was invited by a neighbor to take a job working for the City of Redwood City as an event planner–she declined, but was extremely flattered.

According to Gizela, the thing to really take from her project, was “Yes, it was a lot of fun, but anything is possible if you just apply yourself. You can be unstoppable and without constraints. How do you explain a sense of accomplishment at something like this, the sense of awe at what we created?” She said she would never in her life have ever done anything like this, and to have the event and to be able to share it with everyone –“It was just magic”.

Pictures can be seen at https://www.facebook.com/PeacenLoveonHaight