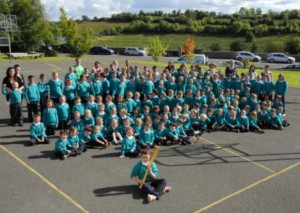 A landmark Education Graduate and philanthropist was an Olympic torch bearer in Northern Ireland - then he sent the torch to tour Ireland after the Summer Olympic Games. According to an article in the Leitrim Observer, Landmark graduate Brian McCauley, a torch bearer in the London Olympics that took place this past summer, has loaned his torch so that it can be brought to various communities across Ireland (torch bearers can buy their torches and keep them in their possession).

The Observer describes McCauley’s motivation: “Brian MacAuley has given it on loan to people to share with their communities throughout the island of Ireland. Brian’s wish is to give people the possibility of creating closeness, love and community.”

McCauley was selected to bear the torch because of his work supporting the local economy, including programs to support entrepreneurs and various charities.

As part of this, fellow Landmark Education graduate Oliva McHugh brought the torch to Leitrim, where she shared it with a variety of community groups and school children at Drumcong NS (see the picture above).