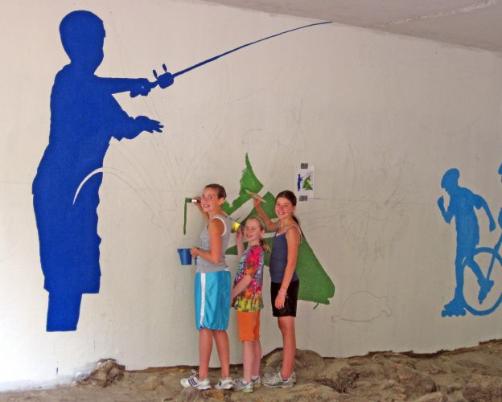 Community organizer and Lutheran pastor Susan Schoon organized a new, 69-foot mural on a bike path in Shoreview, Minnesota, out of her participation in Landmark Education’s Self-Expression and Leadership Program. The mural now covers a tunnel on the bike beth previously covered in graffiti. The largest newspaper in Minnesota, the Minneapolis Star Tribune, wrote a story telling about the evolution of the project and how the local community became involved. Part of the story appears below.

With the city and county’s approval, a grass roots group of dedicated volunteers brought a colorful mural to Rice Creek Park in Shoreview

Where graffiti once defaced the bike trail in a north metro park, a community-designed mural has taken its place. e 69-foot-by-12-foot work, the product of a grass-roots group called Tunnel Vision Community, was completed earlier this month and the subject of a celebration Sunday at its home in Rice Creek Park in Shoreview.

A crew of 45 volunteers did the painting over the course of two weeks, with workers bringing paint, supplies and food to share.

Susan Schoon, an ELCA pastor and project developer, said that even though the economy is in a rough spot, finding resources wasn’t an issue.

The city and county approved the project, but it was a Tunnel Vision Community effort, and its members will maintain the painting in the future.

Schoon developed the project after taking an independent leadership class in a program called Landmark Curriculum for Living. As part of the class, she needed to come up with an idea that would give back to her immediate community.

She began talking with others about painting a mural on the wall of the underpass that she often biked past, and also asked passersby for their thoughts about a painting.

She then looked for a designer who would volunteer his or her time and got an enthusiastic response from a former colleague, Christopher Bohnet, of Minneapolis.

Bohnet, a freelance graphic and environmental designer, had never volunteered his time for such a large project but said the idea intrigued him and “I dove in head first.”

Schoon wanted the mural to reflect not only the Rice Creek Park area, but also how individuals connect with their community, and Bohnet developed a design using an initial sketch by Shoreview sixth-grader Ana Face as well as research that he and others did on the Shoreview area.

After that, word of the project circulated in the local newspaper and on Internet sites, and volunteers came pouring in, including a local Girl Scout troop and children from surrounding neighborhoods.

The design was projected on the wall and traced, and volunteers filled in the shapes with brightly colored paints. Mackenna Page, 10, biked to the site six of the days. Though she was giving up her last days of summer to work on the project, she said it was worth it. “I wanted to paint. It was really fun.”

Another volunteer, Ashley Clark, 15, said she was pleased with how the mural tuned out. In the coming months, Clark will run past the mural with her cross-country team and said she hopes others take notice of the painting.