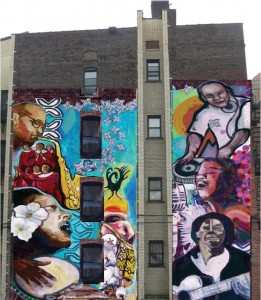 Anthony Smith's project in the Landmark Self-Expression and Leadership Program was a mural that celebrated Newark's musical history while supporting a thriving community. A plan to create a mural to beautify a vacant section of land in Newark, New Jersey’s historic Lincoln Park, grew into something much more, becoming a multi-purpose project that engaged the entire community. Anthony Smith’s project in Landmark’s Self-Expression and Leadership Program began with the idea of creating murals around the neighborhood of historical Lincoln Park area of Newark on fencing of vacant land, with the idea was of repurposing the land with art that was painted by local school students and  that reflected the community, which would be wrapped around the fences promoting civic pride.

As a host of community organizations and activists jumped on board – ranging from Rutgers University, the Newark Public Art Program, and many others – the project took on a new shape, becoming a giant mural that covered a whole building on the district’s main thoroughfare. The mural supports a proposed outdoor performance space that will have a community farm with hydroponics, aquaponics and a food concession stand.

The mural was entitled the ‘Emancipation of Music’. It was made in what was a thriving home for jazz music in the 1930s to 1950s, and the site is also where Abraham Lincoln spoke before his inauguration, and this is the 150th anniversary of the Emancipation Proclamation.

The mural was unveiled in a ceremony on May 10th, attended by the many organizations and people that helped make the mural a reality.