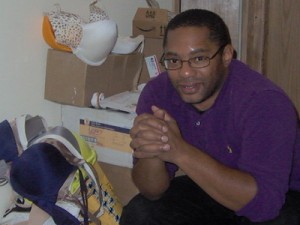 Oz du Soleil's Support 1000 program, created in the Landmark Education SELP, has contributed bras to thousands of women in need. Landmark Education News has received an update on the project that Oz du Soleil of Chicago created in his self-expression and leadership program. Trough the project, which Landmark Education News covered after an article in he Chicago Tribune, collected bras, du Soleil has collected almost 4,000 bras which he has distributed to a variety of organizations that support women in dire need.

Most recently, du Soleil and the organization he created to distribute the bras, Support 1000 (named after his original goal for collecting bras, long since surpassed), were featured in The Grio, a leading blog offering stories, News, blogs and videos from the African American community.

Most recently, Support 1000 has contributed bras to a San Diego non-profit that helps women inmates reintegrate with society after their release. The article also points to experts who say that taking care of a woman’s basic physical needs is critical to confidence and feeling of empowerment. To contribute or find out more information, visit the Support 1000 wesbite. Here is some of the story from The Grio.

Julia Sledge runs a nonprofit program in San Diego that helps former women inmates re-enter society. Among the basic items that many of these women need when leaving prison or jail is underwear.

So, when Sledge ran across Ozkr “Oz” du Soleil’s Internet offer to donate bras to low-income women in need, she quickly responded.

Two weeks later, a shipment of 50 bras arrived, which Sledge, founder of St. Taylor’s Wrap-Around, will distribute to women who are on parole and unemployed. Good-quality bras, which costs between $20-$50, can be expensive for low-income or out-of-work women.

“[Not having] a change of underwear because you can’t afford it” is a reality for many of her clients, Sledge says, adding that she speaks from similar experience. “I’m heavy-chested and remember once, years ago, being so broke that I had to ask someone to help me buy a bra that would fit me.”

To read the entire story at much greater length, visit The Grio website.