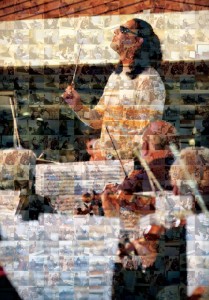 A recent story in the Jerusalem Post highlighted the project created by Ido Yaari in Landmark’s Self-Expression and Leadership Program. Titled ‘Moments the Blind Can See’, the project allowed the blind to take photographs and have their view of the world expressed through the photographs with the help of graphic designers. Here is an abbreviated version of the story.

A different way of seeing Called “Moments the Blind Can See,” the exhibition was conceived and organized by Ido Yaari, 33, a volunteer at the Center for the Blind for the past three years.

“I got to know a little of the world of the blind from volunteering there,” he says. However, it was a course he took at Landmark Education, an organization devoted to self-improvement training, that ultimately lit a big enough fire under Yaari to get him to share his knowledge with the rest of the world.

“The course required each of us to undertake a project that is bigger than the things we usually do in our lives. The thought behind it was that we would think and behave the same way in our projects as we later would in real life. So the idea was to learn to overcome the obstacles stopping us in our projects so they won’t stop us later in real life. Since I’d been volunteering for the past three years in the Center for the Blind, it was obvious to me that my project should deal with the blind community.”

The first obstacle Yaari had to overcome was an evident lack of enthusiasm for the project at the Center for the Blind, an umbrella organization of various nonprofit organizations throughout Israel that assist the visually impaired.

“I sat down with a friend of mine, Gilad Ben Ari, a well known photographer, and he said, ‘Why not do an exhibition of blind people taking pictures?’ But when I went to the center and proposed the idea, they said, ‘Look, we already have a bunch of blind people doing photography.’” This initial rejection turned out to be a blessing in disguise. “So I went back to the drawing board and came up with another level, which was the idea of adding graphic designs into the pictures. And this is the first time in the world that we have this exhibition in which blind people take pictures of things they have some kind of emotional connection to. They take the picture, and then afterwards they sit down with a graphic designer and tell him how it looks in their minds, how they imagine it. The purpose of the graphic designer is to take the blind person’s perception of the photograph and put it in the picture itself.”

The finished picture is thus a juxtaposition of two distinctly different ways of “seeing” – the way the camera sees, and the way a blind person envisions things in his or her mind. Says Yaari: “It’s kind of ironic in that a blind person gives us the reality in this photograph, using the camera, and then a person who can see – the graphic artist – gives us a glimpse into the blind person’s world.

As soon as Yaari began to talk about what he wanted to do, the response was overwhelming. “I got the graphics designers from Facebook. On a Wednesday, I put up a post that I was looking for volunteer graphics designers for this project. By Friday, I had 42 graphic designers signing on to help, and I only needed 21.”

Literally everything involved with the project was contributed pro bono and completely without charge, including the photo print canvases from Swift.co.il and, most importantly, the services of Studio Gavra, a well-known school of photography. Intrigued by the project, Studio Gavra provided each blind photographer with a camera and a sighted photographer to accompany him or her to the photo-shoot locale. Each sighted photographer offered his blind colleague some basic pointers in picture taking and, according to Yaari, “brainstormed with the blind person about what he or she wanted to photograph.” The blind photographers, along with their photos, would then sit with the graphic artists, all of whom donated their time and efforts as well.

The resulting pictures are fascinating, both as works of art and as rare glimpses into the cognitive world of the blind. Among the most striking is a panel of pictures of, well, sound.

Yaari stands by the pictures and explains, “Shimon Roitbord is 14 years old. He went to the market to photograph sounds. He wanted to show what they look like. So he went out with the sighted photographer. She put the camera around his neck. He held it down at his chest. And every time he heard a sound, he just turned toward it and took a picture. Perhaps the most eye-catching work in the exhibition is a picture by Ethiopian immigrant Beza Nevava that shines with a riot of exuberant colors. “Beza lives in a world with no boundaries,” Yaari says. “He represented Israel in the Special Olympics in Beijing. He runs, He has climbed Mt. Everest. His favorite thing now is skydiving. And what he is showing here is a picture of a man running in Hayarkon Park in Tel Aviv. The basic thing he wanted to express is the confidence he has while running. This is the confident, almost child-like confident world he lives in while he’s running.”

Another picture suggests that it perhaps takes a blind person to show us that memories are things that happen to the people we were, not the people we are now. Sisi Ben Simon took her camera to the home of her childhood and took all her photographs there at the camera level of a very little girl.

Some pictures, like that of Riki Pritash, could easily pass as the work of a professional sighted photographer. Pritash expertly depicts a young mother proudly hunkering down between her two toddler-aged children on tricycles. A graphic artist later added an effect to suggest the tricycles’ movement and speed.

“I have two purposes in this exhibition,” Yaari declares. “One is to show that regardless of the obstacles in life, we can do pretty much what we want to do. It’s up to us. Not just the blind, but everyone. This exhibition is an example. If a blind person can pick up a camera and take a picture of reality that he cannot see, then anyone can do anything.

“And the second objective is to make people aware of the blind people’s world, which we know nothing about. We see the blind as people who need help. And they’re not like that. This is something that some of them really want to emphasize – that they are people just like us. They’re denied many opportunities because we perceive them to be handicapped and incompetent.”

It is perhaps too early to tell whether or not the exhibition’s blind photographers will take more pictures and continue to surprise us with their unique ways of seeing the world around them. Ido Yaari, however, is already planning his next obstacle-busting project. This time, he says, it will be on behalf of a center for deaf and hearing-impaired children, where he also volunteers.