“As a nation, we have an incredible delivery system for medication…but for the behaviors and practices that underlie health, there is no delivery system.”

Advancements in surgical and pharmaceutical medicines are some of the greatest achievements of the 21st century, saving or improving the lives of patients around the world. But often, doctors recommend more than just chemical or surgical intervention. Lifestyle changes are one of the most-prescribed recommendations by American physicians to their patients, and they are also the least-employed. Why is that? What does it mean on a practical level? And how do we re-premise what wellness is so that people can more readily achieve it?

Meet Drs. Elizabeth Markle and Ben Emmert-Aronson, Landmark graduates in Oakland, California, who are working to transform the conversation around health and wellbeing in the United States with their nonprofit organization Open Health Wellness:

“Our mission is transforming health care and health outcomes for the communities that need it the most. And we decided that we are going to create a behavioral pharmacy, or an experiential, democratized delivery system for one universal prescription, which we abbreviate to be: ‘Move, Nourish, Connect, Be.’ So physical activity, health meals, social connection, and stress reduction. And that’s what we do!”

That’s Dr. Elizabeth Markle, one of the two founders of Open Source Wellness. In sharing about the organization and its mission, it is clear that this transformation in health and wellbeing is very important to both Elizabeth and Ben – and that that has been true since far longer than when the two first took The Landmark Forum in 2012.

“The field of Integrated Primary Care Behavioral Health was where we did some of our clinical training,” Elizabeth explains, “which meant that we got to participate in a lot of doctors’ appointments with patients.” In doing so, they saw the majority of patients–regardless of diagnosis–were being given blanket behavioral prescriptions. “Of course, back then, I didn’t call them ‘behavioral prescriptions,” she adds with a laugh, “I just called them ‘Things Doctors Tell Their Patients to Do.’” Exercising, eating better, reducing stress, and getting social support –these were the suggestions Elizabeth and Ben heard constantly, but there was never any context.

“And Ben and I, we would talk, and we would say, wait a minute – if we prescribe antibiotics or insulin or antidepressants, we would never say ‘Good luck finding it,’ it would be at the pharmacy that’s around the corner from your house, your insurance will pay for it, and a pharmacist will make sure you actually know how to take the medication, not just talk about it! But for these behaviors, it’s a prescription to nowhere. As a nation, we have an incredible delivery system for medication that’s called the pharmacy. But for the behaviors and practices that underlie health, there is no delivery system.”

When Elizabeth signed up for the Self-Expression and Leadership Program in 2015, she could see a big opportunity for transformation in health care. And even though Ben wasn’t in the program with her, he was her partner in the project every step of the way. In his words:

“I was already in, alright? We had talked about Open Source Wellness before, and I was like, ‘Yes, we’re going to make this happen!’ So my experience during her SELP was not one of Elizabeth enrolling me in OSW, but rather was one of – every week there was a new thing. The thing that stands out the most to me from the SELP is that the structure of it and the format of it has you make amazing things happen. Just having that steady accountability, having resources, having the inspiration to grant goals is vital in making them happen.”

“Our first vision is not how it looks now because people didn’t like our first vision. We joke that people vote with their feet.”

Elizabeth and Ben knew that they were going to create a transformation in behavioral wellness, but they had to work hard to determine both what that would look like and even what was missing in the first place. It wasn’t always a clear path. “[That] was actually a miss in our early work,” Ben says. “We started with the belief that people know what to do and just need help doing it… [and we realized] we have these huge gaps, we have these holes where people don’t know what they should be doing.”

When their early attempts weren’t succeeding, they knew something was missing in their listening. But in order to determine what that something was, they realized they would have to have real, authentic, connected conversations with people in the communities they were trying to help – so that’s exactly what they did: “We sat down with members of the community and said, ‘What is it that you want?’”

But in order for that to happen, Elizabeth and Ben had to first overcome an even bigger breakdown: they were not part of the communities they were trying to help, so they weren’t taken seriously as agents of change. “Enrollment became–I don’t want to say life or death, but it was all we had.”

“There’s something humbling about gaining the trust and the credibility of low-income, vulnerable communities,” Elizabeth says. “It really took steady presence over three years to build the relationships such that those clinics and those health care providers would trust us, and that those communities would really start to take root in our program. And now, they serve as peer leaders, and they are deeply invested in and shaping the way our programing looks now. But it took a long time.” “We were two young, overeducated, white people from the suburbs,” Ben adds with a laugh. “That’s not great credentials for coming in to low-income housing communities, for example. Which we did.”

But when that trust began to grow, it made everything possible.

How does Open Source Wellness work?

Move. Nourish. Connect. Be. These are the four cornerstones of Open Source Wellness’ structure, but above all, Elizabeth says, “our first goal is creating relationships.” Working in 4-month cohorts, participants engage in physical activity; practice stress reduction; eat healthy, family-style meals together; and connect authentically with each other. In the first week of each month, new participants join, and they not only take part in all the activities, they sit in table groups with participants who are farther along in the program. As Ben describes:

“We’ve found that it’s really important to have new and old participants together. Instead of having one, four-month cohort and then you start over, where you have to recreate the group culture and group norms, these are constantly rolling, so there’s brand new people with folks who have been there for a month, for three months, and so that culture, that vitality, that caring for one another, goes throughout.”

“We really believe that community is medicine,” Elizabeth says. And the results suggest they’re on to something. A self-proclaimed ‘data geek,’ Ben worked with area clinics to analyze data on participants, and what he found clearly demonstrates the difference Open Source Wellness is making in its communities: “Our participants with depression decreased their depression by 47%…Participants with high blood pressure had a 16-point drop in their blood pressure – this is larger than what we often see in clinical trials of a new medications!”

Even more amazing, they are seeing a 77% reduction in emergency room visits and unplanned hospitalizations. “In four months, we’re not undoing fifteen years of heart disease,” Ben acknowledges, “but I think it really does point to the impact of connection, of social support, and the detrimental impacts of social isolation and loneliness.”

A rising tide lifts all boats

While partnering with a group like Open Source Wellness may seem much harder for low-income clinics than it would be for, say, corporations, Elizabeth and Ben have worked with their local communities to find a solution here, as well. As Elizabeth explains:

“With the support of one of our early clinic partners, we devised a model to merge our program with a group medical visit. This means we run our program just like we always do, and one doctor or nurse-practitioner from the clinic participates, pulls patients aside for individual check-ins, and then can bill insurance for a group medical visit for all of those patients. So that doctor might have seen eight or nine patients ordinarily, but because we’re there, they’re seeing 16-20, which generates a ton of extra revenue. So suddenly there’s extra revenue that covers our cost–it pays for Open Source Wellness and more.”

Demonstrating that it is possible to cover the costs for clinics is currently one of their biggest challenges as Elizabeth and Ben work to grow Open Source Wellness in places beyond California and their new remote site in Washington state. “I travel a lot and speak about this all over the country,” Elizabeth says, “and the response I often get is, ‘Oh, you all out in California have all that money; that would never work here!’ And I am on such a mission that any Federally Qualified Health Center in the country knows that they can implement this with us and have it be revenue-positive. That they can deliver better care and make money.” 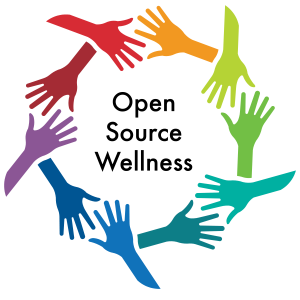 If you would like to learn more about what Elizabeth and Ben and Open Source Wellness are creating in the world of transformative health care, you can find them online.