G.V. Bhat lives in Sirsi, India, a small town with a problem common to rural India: no jobs, or more accurately, no middle class white collar jobs. This problem causes educated youth to leave the villages they grew up in as soon as they are of working age, overpopulating the cities and emptying rural communities. Bhat took Landmark Education’s Self-Expression Leadership program, and this caused him to launch an incredible project that has the potential to revolutionize rural India.

It began with a request. A group of Bhat’s friends were looking for jobs in Sirsi, but none were to be found, so they asked Bhat if he could help them find jobs in the huge city of Bangalore, where Bhat had some connections. Bhat knew that with the cost of living in Bangalore, they would have a hard time getting by on entry level salaries, so he went to companies in the city and asked them if they had any office work that could be done from Sirsi. A lot of inquiries produced a lot of rejections, but he did find one company, Onsoft Technologies, that was willing to try it out.

It started as a small typing job, but it developed quickly into a full office with 20 young employees working in two shifts at ten computers. Each of them earns at least R.s. 3500 per month just working one shift. While this isn’t a huge salary, it’s more than enough to get by with the lower cost of living in the village. One youth told Bhat that 3,500 a month in Sirsi was easier to live on than 10,000 a month in Bangalore.

Bhat believes that the educated youths of small towns are an incredibly untapped, underutlized labor resource. Low cost of infrastructure, availability of skilled manpower, low attrition rate, and reasonable compensation packages are some of the advantages Bhat sees in rural information technology job creation. He is in the process of expanding the IT work force in Sirsi from 20 to 100, using every computer center in town to get the young villagers trained.

From there, he believes a revolution of sorts is possible. He has taken on the mission of spreading the availability of this opportunity to every small town in Karnataka, his province. The ‘revolution’ has already begun, as he has been getting inquiries from groups of youths from towns such as Hassan, Haveri, Badami, as well as some small towns in the Mysore district, asking for his help in replicating this job model in their towns.

Curiously, when Bhat initially approached banks about this job model, he was told it would never work–That it was financially unviable. However, bank managers have now visited the work center in Sirsi and have been impressed with the project, giving hope for financing in other towns. All of this is happening because one person was willing ignore the critics and do whatever it took to bring a new possibility to his home town.

For a news story about G.V. Bhat’s creation of IT jobs in rural Karnataka, check out Ohmy News.

One woman’s project in Landmark’s Self-Expression and Leadership Program is to take on the rising youth suicide rate in India.

A new project is attempting to remove the stigma attached to mental health in India.

One person’s project in Landmark’s Self-Expression and Leadership Program is transforming the Mumbai transportation system so that deaf people can travel as easily as hearing people. 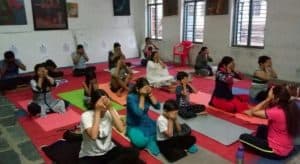 A program of sight exercises aims to improve vision without glasses.