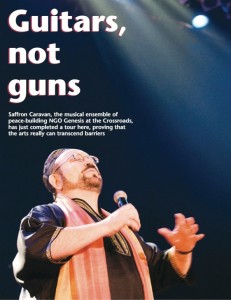 The Jerusalem Post tells the story of the world tour and Jerusalem concert of Saffron Caravan, the ensemble created through the Genesis at the Crossroads organization to promote world peace through the arts. Genesis was founded by Wendy Sternberg in 1999 out of her taking part in Landmark Education's Self-Expression and Leadership Program. The Jerusalem Post recently featured Genesis at the Crossroads, the acclaimed NGO founded by Wendy Sternberg in 1999 while she took part in Landmark Education’s Self-Expression and Leadership Program in order to bring peace and understanding to the world through artistic expression.

The diplomats of the world can argue about what peace looks like and how to achieve it, but Wendy Sternberg knows what it sounds like – an Iranian Santour player, an Israeli-Arab oud player, Indian and French-Canadian percussionists and an American on the keyboard and harmonica, led by a cantor in a Greek-inspired rendition of L’cha Dodi in the auditorium of the Jerusalem YMCA.

Sounds like a cacophonous mix – but for Sternberg, it’s perfect harmony, and a dream come true.

These are the musicians that make up Saffron Caravan, the musical ensemble of Sternberg’s Chicago-based non-governmental organization, Genesis at the Crossroads. Genesis’s mission is to use the arts as a vehicle for peace-building by creating and implementing innovative artistic, arts-education and humanitarian programs worldwide. It has just completed its first Israel tour and shows no sign of slowing down.

Sternberg was a doctor of internal medicine before she created Genesis in 1999. “I never thought that this would be my career and that I would leave medicine,” she says. “It was a process, an evolution, a journey.”

She has always had a strong connection to the arts. “Since I was a very young child…I have done everything in the arts. I’ve played instruments, I sang in choirs, I was involved in Israeli folk dance…I believe the arts are something that reaches a very deep human soul level for everyone, and I think that if we are looking to create a humanistic society…the best way to do that is using art and humanities.”

Genesis bgan its work through half-day workshops and soon grew. In 2004 the organization held a weekend-long festival featuring 130 artists. IN the finale, two musicians – a Muslim and a Jew who had never met before – performed together.

“That year we toured them with an ensemble of nine other artists,” says Sternberg. “I started realizing that our work needs to be taken to other communities. [I was seeing that] arts transcend barriers and they can be a neutral and creative vehicle for bringing people together.”

Saffron Caravan was established in 2007.

“I wanted Genesis to have a signature ensemble, a showcase piece that really showed the mission of Genesis with all of its activities,” explains Sternberg. She believes that the ensemble is an example of Genesis’s message: “[they show that] not only can people work together, when they do we contribute to society and the world.”

When choosing musicians for the ensemble, she had clear criteria. “They are all hand-picked…either artists with whom I had worked before or who intrigued me,” she said. “They had to be artistically gifted musicians who could work together with an ensemble…[with] a level of inspiration about the mission and willingness to contribute.” She says that politics has never been an issue among the musicians, who hail from the US, Canada, Cuba, India, Iran, Israel and Afghanistan.

Saffron Caravan has performed throughout the US, including at the United Nations 60th anniversary, and in Morocco.

Sternberg is careful about the places she chooses to bring the group. She says that Genesis is “apolitical and areligious to the point that you can be while making the point that art can be used as a diplomatic tool.”

She describes Morocco as a natural choice and a “cultural crossroads…[full of] different faith-based communities work together…it was a great platform for launching the concept.” However, a planned performance at Egypt’s Alexandria Library was canceled when Sternberg discovered that the group’s work would be censored by the government. She also declined an invitation to perform at Israel’s 60th anniversary celebrations, saying that the group does not perform at political events.

But Sternberg, who has spent significant time in Israel, knew that she would come here eventually.

She acknowledges that working in the Middle East is not easy, but she took the challenges in stride.

“This is the Middle East – if you’re not resilient, you’re dead. And if there are no bumps in the road, then you’re not working for peace.”

Though she has been planning the tour for years, she says that recent events have made it even more relevant. “We were supposed to come in April but moved [the tour]to September. Then came the Arab Spring, the the [upcoming] UN resolution and the tour was already in place.”

“It’s an absolute coincidence that we are here during this time. There was a lot of back and forth about whether we should come – if it’s too dangerous, if it’s too charged. If there’s ever a time to share this message it’s now – but we altered the tour. We are no longer going to the West Bank or Amman, Jordan [as we had planned].”

“Sometime in the future we will go,” says Sternberg.

Saffron Caravan’s itinerary included performances in Jerusalem, Tel Aviv and Beersheba and workshops in several schools. A special emphasis of the tour was building a connection to the Beduin community.

“We wanted to help the Beduin community [through the creation of an] arts/social entrepreneurial program,” explains Sterberg. “[The goal is to] preserve arts heritage and create jobs.”

The encounter with the Beduin community was a chance for Genesis’s humanitarian wing to shine. Through a program called “Arm Them with Instruments,” Genesis brings gently-used instruments to youth in conflict regions.

“We’re helping the Beduin community get started by bringing instruments to them and finding artists within the community to start building a teaching core,” says Sternberg. “If you can take passion and creativity and channel it away from something potentially destructive into something constructive, then you can change lives.”

At Saffron Caravan’s Jerusalem perfomance, the audience was almost as varied as the performers – hijabs mingled with kippot and dialogue was translated from English into both Hebrew and Arabic.

In her opening remark, Sternberg said that it was a “dream come true” to be in Jerusalem, “a city that can be a beacon of light to the world.”

The group’s music is eclectic and energetic. It ranges from Afro-Cuban spirituals to traditional Turkish and Arab songs to original santour pieces by Iranian Ku Hagighi, in which his mallets fly across the instrument at breakneck speed. Each instrument and performer is given a chance to shine, but the mix between them is unexpected and special.

After all, when is the last time you heard an oud and a harmonica play together?

Howard Levy is the musical director of Saffron Caravan. He has been with the project since the days of the Chicago festivals and, like all of the performers, has had a distinguished musical career. He says that he was attracted to the musical aspects of the project, but that those aren’t so separate from its greater goal.

“The musical aspect is the greater mission,” said Levy after the group’s Jerusalem performance. “There are no boundaries playing music with people from anywhere, in any style.”

“We have the music speak for itself.”

Alberto Mizrahi, a noted cantor and Saffron Caravan’s vocalist, agrees. “We don’t hide it,” he says. “We are spreading a message of peace and love, but we’re also [here] for the music. We want to take it to people who don’t know it – like Beduin that wouldn’t expect a Jewish guy with a yarmulke to be singing in their village.

Haytham Safia is a lauded oud player who grew up in Kafr Kasif in the northern Galilee. He said that he’s used to connecting cultures. “I grew up Muslim, in a Christian city, in a Jewish country,” he explained.

The Israel tour was Safia’s first time working with the group. When asked how it felt to be playing with them in Jerusalem, he says that it was “like home…as if we’ve been playing together for years, not as though we just met a few days ago.”

An added bonus in the group’s Israel tour was the participation of Peter yarrow of the folk group Peter, Paul and Mary. To the delight of the Jerusalem audience, he performed some of his classic songs together with the ensemble.

He said that he was attracted to the group because of its premise ad the fact the musicians are “extraordinarily gifted…they play beautifully and combine instruments in new ways. Some are centuries old, some contemporary, and some take it beyond.”

Yarrow also added that he was attracted to a new project that Genesis at the Crossroads is launching – a Junior Saffron Caravan. Wendy Sternberg wants to assemble a youth ensemble to continue the group’s work.

“We are looking to teach them to be arts diplomats…to represent their country, region and identity,” she said. Saffron Caravan’s Jerusalem performance featured the beginnings of the group – three extremely talented young jazz musicians from the Tel Aviv Conservatory of Music. Sternberg hopes to expand the group to also include Israeli-Arab and Palestinian youth. “this youth group is to be our legacy,” she says. “If Genesis is to have a life span beyond our artists, we must be doing this with our youth.”

Sternberg’s plans for Genesis and Saffron Caravan are ambitious: a Latin-American tour, the development of the future Genesis Institute for Global Leadership and the expansion of the Junior Saffron Caravan concept to include ensembles throughout the world. But on the night of the Jerusalem performance she, like everyone else, was reveling in the moment.

The performance ended with the musicians and the youth playing Chicago blues classic in homage to Genesis’s roots. For members of the audience, what may have sounded strange and impossible mere hours before was happening before their eyes – a mix of old and new, East and West, musicians whose countries are at odds playing together and making beautiful music.

It seemed like the most natural sound in the world.