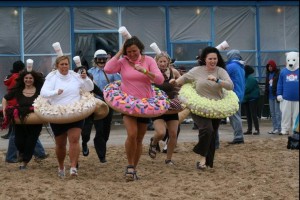 Landmark Forum graduate Jen Kramer is becoming President of the Special Olympics Chicago board - Kramer is also raising tens of thousands of dollars each year for Special Olympics via the Polar Plunge events that take place each winter in Lake Michigan.

On March 4th, Landmark Forum graduate and Chicago native Jen Kramer will be taking part in her 9th ‘Polar Plunge’ – a two minute dive into Lake Michigan which is a fundraising event for Special Olympics Chicago. Kramer has raised over $100,000 over the last nine events, including over $25,000 last year. At the same time, Kramer is being named President of the Special Olympics Chicago board. This year, Kramer is well on her way to raising over $30,000 – visit Kramer’s fundraising page here.

In regards to the fundraising and being named Chicago Board President, Kramer said “I’m honored and thrilled to continue to contribute to the organization that I know is making a huge difference in the lives of so many people.”

This year, more than 2,000 people are expected to plunge into the icy waters of Lake Michigan, with many of the teams seeking to compete for the coveted best costume award – costumes have blossomed as part of the event. Kramer’s costumes over the years have included Dopey of the seven dwarves, a gladiator, a fairy, and last year, a donut. Registration for the event is still open at Special Olympics Chicago. Also read Landmark Education News’ first story about Kramer from 2007, when the Chicago Sun-Times wrote about Kramer and her fundraising efforts. Also, watch the video of the 2011 plunge below, in which Kramer is featured.