How I empowered Myself – One Man’s Journey 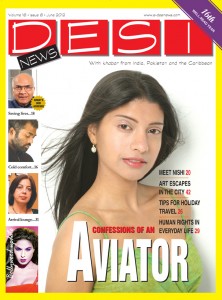 DESI Magazine, a Canadian publication for teens of South African descent, recently profiled the life journey of Khush Panthaky. In it Panthaky tells of his life’s journey, which included a severe brain injury while growing up.

He speaks of the difference The Landmark Forum made in his life, and his commitment to end childhood bullying. An excerpt of the story can be read below.

How I Empowered Myself (an excerpt)

The Forum Leader talked about Citizen Kane that first night that Panthaky attended. About how the main character was constantly trying to recreate his childhood.

“I had a ‘Whoa!’ moment. While I wasn’t doing exactly that, I was certainly living in the past. I was seeing conflict where there perhaps wasn’t any. I was taking all comments and actions personally and retaliating. I had become the sort of person who would swerve into a lane to slow down someone who was speeding. It was like, ‘How dare they make things difficult for us law-abiding drivers!'”

The Forum leader helped Panthaky see that he was a protector, that his actions were a result of trying to protect people from harming themselves or others.

Friends and Colleagues noticed the change in his personality. He is more focused and interpersonal relationships have all improved.

One of the things that helped him on this journey of self-realization was improv.

He had completed training with SecondCity, the world’s premier comedy club/theatre and school of improvisation, back in 1994 and Rahnuma suggested he take it up again.

“Improv helped me laugh again. It started the cycle of healing. I try and go as often as I can.

“Earlier there was so much white noise in my head all the time. That’s been replaced with clarity. This has opened up so many possibilities.”

Possibilities that include a book he is writing, detailing his experience as a survivor of brain injury. The initial motivation was therapeutic, he saw it as an outlet to break free from his past. Now Panthaky sees the book as transformational, something that might help others heal. It’s not a weepy, feel-sorry sort of book, he says, but an affirmative one.

“There are several funny things that happened to me because of my lack of judgment and they are there in the book! Humour sustained me and keeps me aloft, keeps me from wallowing in the past.”

He also has speaking engagements at local schools where he talks to students about bullying and other destructive behaviour and believes they connect with him because he’s been where some of them now find themselves.

“My life has been a series of abject failures and about climbing back from them. I tell the students I see them as young people who make a short-term bad decision. I put the onus on them to put a stop to this downward spiral. I think I get through to at least a few.”