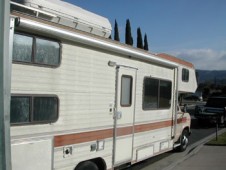 Hearts of Fire, the organization created by Landmark graduate Bob Ballard, began its Motor Home Housing project with the donation of an RV to a homeless mother and her son.

Bob Ballard’s Hearts of Fire organization, originally created by Ballard while he was taking part in Landmark Education’s Power and Contribution course three years ago, continues to find innovative ways to empower the homeless with the launch of its motor home housing program. The launch featured the donation of an RV to live in to a homeless woman and her son in Ventura County, California, where Hearts of Fire is based.

The RV was donated to Maria Pollack and her 12-year old son, whose plight Ballard heard about from a neighbor, according to The Ventura Coutny Star, which covered the story. Ballard found Edward Bermudez, a resident of Ojai (where Hearts of Fire is based), to donate the vehicle.

According to Bermudez, “It’s a perfectly good vehicle, only 60,000 miles, but we never used it that much.”

“I wish I could hug all the people that helped me,” said Pollack, who according to the VC Star was overcome with gratitude.

The RV was donated in a ceremony on January 30 according to the Ventura County Reporter, another newspaper that covered the story. The Reporter quotes Ballard as saying that he hopes the event will launch an event to collect, renovate and distribute mobile homes to the homeless in Ventura County, where more than 2,000 people live on the streets and there is no full-time homeless shelter.

Ballard and Hearts of Fire are looking for more vehicle donations and garages and mechanics to help repair them. Hearts of Fire was created to empower the homeless through innnovative means such as art and music.