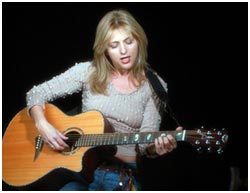 Landmark Education graduate Irena Hart founded the ‘Harmony4Kidz’ non-profit organization to make a difference in the lives of homeless children. Currently, Makarchuk has embarked on the Harmony4Kidz 2010 Summer Tour, putting on events across the United States to benefit homeless children through direct action, empowering their artistic self-expression and raising awareness.

Hart, a Connecticut-based singer who created the organization after an encounter with homeless children around a concert taking place in Central Park in New York City, began the tour on July in New York and is visiting thirteen cities across the U.S. in July and August.

According to Harmony4Kidz, the goals of the tour are to raise awareness about homelessness among children; to raise money for homeless youth to participate in art and music summer camps; to set up scholarships for homeless youth to music and art schools; and to promote community participation. For every $500 raised, Harmony4Kidz can send one child to a summer camp for a week.

A major goal of Harmony4Kidz is to have the funding to operate its own summer camps by 2012. To find out more about the organization, visit the Harmony4Kidz website.