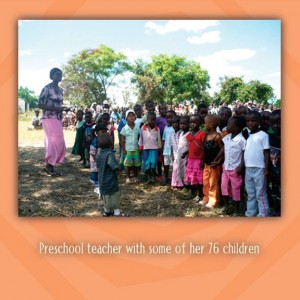 The Goromonzi project, an organization created by Janet Shaw in 2005 out of taking Landmark Education's SELP program, helps educates thousands of Zimbabwe orphans.

Landmark Education News has received an update on a self-expression and leadership project created in 2005 called the Goromonzi project. Created by Janet Shaw, the project began out of her visit to the Goromonzi rural district of Zimbabwe in September of that year (Shaw grew up in Zimbabwe) when she met 17 destitute AIDS orphans there. She found sponsors to pay the school tuitions for the 17 children, and the project took off from there. Since 2005, the Goromonzi Project has adapated to changing conditions, navigating the country’s challenging political climate to find the most effective ways to aid orphans and other vulnerable children in Zimbabwe. The project makes a difference by creating preschool programs for these vulnerable children, which includes supplemental meals, health care, teacher training, school renovations, and more. Each program takes care of 60 orphans or endangered children.

As a result of this work, Goromonzi program director Patrick Makokoro reports that the Mukombami preschool has opened at an event attended by 350 people.  Makokoro also reports that attendance has jumped by 35% at three different preschools where Goromonzi has completed upgrades. More recently, a three day training program was completed for 30 preschool teachers in August. Training sessions have also begun to allow all preschool children to get monthly checkups at local clinics.