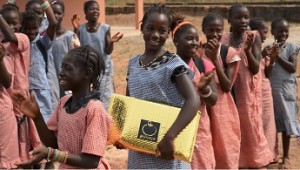 Globetops is an innovative organization that gets refurbished laptops into the hands of community leaders in the developing world.

A bold, novel project called ‘Globetops’ is bringing the power of laptops to unlikely places in the developing world – community leaders who can drastically increase the power of what they are up to with internet access and computing power at their disposal.

Becky Morrison has always been someone who made big things happen – she produced the visuals for U2’s last word tour, and shot the first 3D film made in India. But until she participated in the Self-Expression and Leadership Program she had absolutely no thought of founding a world-changing non-profit organization.

During the program, a friend in Guinea, Africa, where Morrison had been because of her passion for African dance, asked her if she could help him get a laptop.

At first Morrison didn’t see much possibility there, but when she put the idea out on Facebook, she was surprised at how many people were willing to help, and the idea for Globetops was born.

Soon a full-fledged effort to bring laptops to community leaders in the developing world was underway.

There have been many hurdles along the way, many of them technological. Morrison learned quickly that the quality of the laptops were a big issue – used laptops needed to be cleaned up professionally or else they often were useless for the recipients. Surge protectors are also required to deal with the sometimes “dirty” power in the developing world.

One breakthrough that Glopetops has now achieved is corporate partnerships which clean up the laptops before shipping, including Best Buy’s Geek Squad for PCs and Tekserve for Macs.

Morrison bristles at the stereotype of the developing world as being comprised of helpless, needy people needing Western charity. She sees Globetops not as simply a gift but a means of empowering leaders in their communities. All potential laptop recipients must give a plan for what the laptop will be used for – they are only given to people who are up to a powerful project.

She notes that Globetops has a purpose that differs from the usual charity goal of relieving suffering: “This is about giving a voice and a platform to passionate, powerful people.” Last year, 50 recipients received laptops; this year Globetops is projected to break 100 people in places such as Guinea, Kenya, India and Haiti. Globetops still needs many things to truly reach the potential Morrison sees for it – recipient candidates for laptops, used laptops for donation, and money to make everything happen.

Ultimately, Morrison sees the possibility of Globetops as nothing less than a new model for distributing goods around the world, allowing items that are much more common in one place than another to find their way to where they are needed.

Visit Globetops to get involved or find out more.

2 thoughts on “Globetops Brings Laptops to Leaders in Developing World”