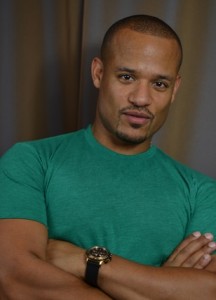 Gamal Palmer's theater program in Tanzania is making an extraordinary difference in the lives of ordinary people.

This is the story of Gamal Palmer, an extraordinary man who is making an extraordinary difference. Palmer created a cross cultural theater program in Tanzania which addresses urgent social issues. He used his participation in The Landmark Forum to reconnect him to what was really important to him and the true difference he was making. “You are going to be a famous actor” is what Gamal Palmer was told his entire life, and he used his acting skills to make a difference for people from an early age. Palmer is the son of a civil rights activist, and his first acting job, at the age of eight, involved working with Full Circle Theater Group  at Philadelphia’s Holmes Prison. The troop went in and spent an hour with women inmates and then an hour with male inmates to use theater as a tool for conflict resolution amongst each other and within themselves. After the experience, one inmate said to them “For the last hour, I felt like I wasn’t in prison no more. Thank you.”

Gamal  was brought up with the idea of using acting for social change.  After high school he attended the University of Miami’s Theater Conservatory, and then worked professionally in large theaters around the country. After several years of working with some of America’s greatest actors, Gamal still didn’t have the career of his dreams. So he applied to graduate schools believing he would take advantage of doing a showcase upon graduation. He was accepted to The Juilliard School for Drama and the Yale School of Drama, both schools have a long history of their graduates launching famous careers from their showcase.

Although it was a tough choice, Gamal chose Yale over Juilliard because deep down he always knew he wanted to do more than acting, and he hoped to somehow  take advantage of Yale University’s vast resources.  However, for the first six months Gamal was miserable. He lost touch with why he chose to go to school in small town New Haven over New York. Then he had a vision of doing a theater for social change program in Africa and pursued it, however, although he approved of the idea, the Dean of the Drama school said no.  He was told there was no funding for such a program.

Not taking no for an answer, he and his colleague found another faction within Yale that was interested in their program, the School of Public Health. It was then that he created Arts in Action: Theater and Public Health In Swaziland and South Africa.  For three years this highly successful program brought pre-med and public health students into a partnership with the People’s Education Theater in Swaziland and South Africa. The students and their Southern African partners went into communities to hear stories about children and adults with HIV/ AIDS.  They used the power of theater for social change to stimulate conversations that had previously been avoided in hopes to contribute to the healing process.

At Yale, most third year theater students are focused on their showcase; however, Gamal was approached by the Dean to accept a postgraduate associate position with the university while simultaneously taking classes at Yale Business school and in theater management. It was a big opportunity for him in business, administration and leadership, especially since he was the first actor to be offered this. However, it brought Gamal into another state of confusion. This was possibly changing the future path of everything he had set his life up for, and yet he found it to be very confronting. He reluctantly accepted the position and stayed at Yale for a fourth year instead of participating in the showcase.

Gamal went through that following year taking the designated classes and created the first ever academic partnership between the Yale School of Drama and the Yale Divinity School to launch ‘Theater for Social Change-Yale in Tanzania’. However, at the end of that year the Dean was faced with the pressures of the economic downturn and reluctantly told Palmer that there was no money to produce this.

Gamal thought that this meant he was giving up his whole life. He had passed on the opportunities of the showcase, and now this too was about to end, but once again he did not give up.  He spent the next year and a half flying back and forth to East and South Africa building connections with people in order to find enough support for his program.  During this time he made these efforts with no monetary gain or income, but he was determined to launch this course . He thought of the perfect donor to launch the program, who said yes, and five months later they were off to Tanzania.

It was a cost free program for the students who participated, who would fly there for several weeks, live with and interact with the local communities and then, in the last week, perform a theater piece addressing the pertinent issues and challenges faced there.  The purpose was to start real conversations, through plays, about previously taboo topics, in order to effect real change.  These were issues like abuse in the education system, waste management, or unsupervised children.  In one instance, while performing the piece for the community about an abusive drunken father, a young boy in the audience was called on to come onto the stage and speak to the father/actor. Just before the boy started talking you could see the beginning of what evolved into an explosion, “Why do you spend all our money getting drunk instead of taking care of your family? You are supposed to be a father. You are not a good father. A  good father would never abandon his children. Why did you leave? Why did you leave them!” as if he were really yelling at his father.  It was a moving experience for the actors, audience as well as the boy who may have always wanted to say this to someone in his own life.

While the experience of the program was thrilling, all of his efforts took a heavy toll on Gamal.  His extraordinary work was impacting lives in a part of the world where it was sorely needed, but in his hidden frustration with his students, he began to feel like he was doing it all for nothing. The students were not handing in their assignments, nor doing reading for classroom discussions and seemed to be unappreciative of the hard work Gamal and his colleagues had put into making this program happen. It seemed to him that the students were lazy and didn’t want to do the tasks he had worked so hard to design. He saw them as ungrateful and thought they had no appreciation for what they were being given. His state of mind was so defeated that when he came back he thought he would never teach this program again.

In December of 2011, a friend sent him to take The Landmark Forum, and it was there he realized things about himself and who he was being when he was with his students. He learned ways of leading and communicating he had not known before. While he loved the work in Tanzania, he realized his students were not ungrateful, rather, they were overwhelmed. The students were in a new place, being exposed to a completely different way of life. It was just all too much.  He had never before known how to truly see things from their side.  Before The Landmark Forum he says that he had become so detached from humanity that he couldn’t see who all these amazing people were. He was consumed with what wasn’t there rather than being enraptured with what was.

In the Landmark Advanced Course, Gamal really got what community was all about.  He also finally understood the difference between talking about Community and really being part of a community. That opened up a whole new world for him. He realize that, in his words, “To have no ego is what it really means to be a leader. To not worry about looking good or not wanting to look bad – that allows you to make a decision out of whatever you are really committed to.”

In the summer of 2012, Gamal made sure the ‘Theater for Social Change-Yale in Tanzania’ happened again. This time around, he experienced profound conversations with the students. Because of who he had become through his participation in The Landmark Forum and The Landmark Advanced Course, he found the students were really interested in getting to know him and he in turn found a new interest in knowing them. The students were so engaged that year that they formed a committee to plan an event on campus to share the program and demand Yale support it in years to come. According to Gamal, when he gave up the idea of making Yale or even himself wrong for the decisions that had been made in the past, he actually allowed himself to walk into a new future – a new career of real social impact.

“What I really got out of The Landmark Forum was the release of my ‘obligation’ to 32 years of being a black man, a bi-racial man, a Jewish man, a non-heterosexual man, the son of an activist, son of a Jewish mother, parents who divorced, all the physical, emotional, verbal and sexual abuse, the day of being a drug addict, all the obligation that went along with it. That I was the person who had experienced all of these things – that I HAD to stand up for this person or that person or that part of me…and that ‘obligation’ which completely paralyzed me from being who I really am – I was able to just give that all up.  It doesn’t mean that I am no longer those things – or that those things didn’t happen – I’m just not obligated to it.  I can actually talk about those things and I can create out of those things now with a kind of a wider lens.  So I think I had this idea that being a teacher at Yale – I was supposed to look a certain way, and that was my obligation. That obligation diminished and put restraints and parameters around what that program could actually be rather than it being what it is!”

‘Theater for Social Change-Yale in Tanzania’ is now an ongoing program at Yale University that will keep on growing and changing forever the lives of those it touches. Gamal is in the process of starting his own organization out of the clarity he has gotten from his work with Landmark Education around what he is really committed to.  His new program is to bring leaders of color together to travel to the developing world to learn from leaders there in a collaborative way in order to come back and have a greater impact in their own communities.  He wants people of color to be empowered in leadership roles.

“There is something about working with those in the developing world – coming from a place of experiencing things that may not be exactly the same but that are similar – causing those people to be the leaders of things like The World Health Foundation  and the United Nations. That’s what I am committed to. That is who I am.”

2 thoughts on “Theater for Social Change Touches Lives of Tanzanians”