For the Love of the Game…and his Dad 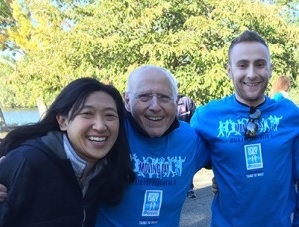 When a man stopped being able to go to see the Red Sox because of Parkinson's disease, his son has pioneered a Parkinson's day at Fenway Park in his honor. Kenneth Robson was a diehard baseball fan, specifically a Boston Red Sox fan, for most of his life. He had Red Sox season tickets since 1994. His son, Sam Robson, says his most cherished memories are the ones of he and his Dad at Fenway Park watching the games. Kenneth loved the game so much he brought a portable radio to a friend’s wedding so as not to miss a playoff game. Next to his family, baseball was his biggest passion in life.

Then he was diagnosed with Parkinsons disease. In the following years his mobility decreased to the point where it was too hard for him to get around the ball park and he gave up his season tickets. Initially he watched the games on TV, but after awhile he stopped watching and listening altogether, when it got to be a too painful reminder of what he used to do before Parkinson’s Disease took away his mobility.

It broke Sam’s heart to watch his father’s health decline and, even before  he did his Self-Expression and Leadership Program, he knew he had to restore his fathers love of baseball…somehow.

With the dual purpose in mind of not only renewing his Dad’s passion, but also raising money for Parkinson’s disease research, Sam had the idea to create a partnership with Major League Baseball and the Parkinson Foundation. According to Sam, National Parkinson Foundation’s mission is to make life better for everyone living with Parkinson’s through expert care and research, and they cannot accomplish this mission alone.

Starting from Los Angeles where he lives now, he began by speaking to several Vice Presidents of the foundation. Next he had a meeting with the Executive Director of the Boston Red Sox Foundation.

“Moving Day” is an annual walk put on by the National Parkinson Foundation all over the country. On Columbus Day weekend, in October 2015, Sam and his family participated in “Moving Day Boston”. He said it was one of the greatest experiences of his life.

“For the first time since I can remember, I saw my dad smile. I saw him interact with people, and behave as he did several years ago, before his Parkinson’s Disease progressed significantly. Most importantly, I got my dad back, and words simply cannot express how that feels.”

Eager to get his project underway, The day before “Moving Day Boston”, he had a meeting with Gena Borson,  Executive Director of the Red Sox Foundation; Rob Shaw who is the VP of Corporate Relations for National Parkinson Foundation; Leilani Park who is the foundation’s VP of Communications, Marketing and Media; and Paul Blom, the foundation’s interim CEO. What they created together was Parkinson’s Day/Night this April (which is Parkinson’s Awareness Month) at a home game at Fenway Park. The Red Sox will Have a group of tickets where sales will help benefit the National Parkinson Foundation for research. The dates for this year’s games are April 18 and 20. Sam’s goal is to scale it up each year with the Red Sox doing this not just for one game, but for every home game in April. Ultimately, Sam’s goal is for every Major League baseball team to participate in April. Sam said “We could raise so much money for research and awareness, but most of all my Dad has become interested in baseball again. When I met with the Red Sox as the season was coming to a close, he was interested in what was happening and in checking it out. It was just a really exciting process that happened very quickly. Its been an unbelievable experience and I am honored to have had the opportunity to start this.”

Sam wants to inspire people to go out and seek other organizations to create mutually benefitting partnerships. “Everyone wins”, Sam explains, “whether they are affected by Parkinson’s or not.”

According to Sam: “If people tell you that the things you want to achieve in life are not possible, don’t listen to them. I can tell you for a fact my biggest naysayer at the beginning was my Dad. He told me not to be disappointed if you fail, don’t be disappointed if you don’t succeed. What you’re trying to do is really hard and its probably not going to happen. Now that I’ve made it happen, he’s excited and I’m excited. Even though I’m in Los Angeles, when the date comes in April, Dad and I will be there at Fenway Park. Some of my fondest memories are with my dad there.”

To register for a Moving Day®  in your area visit www.Parkinson.org/MovingDay.