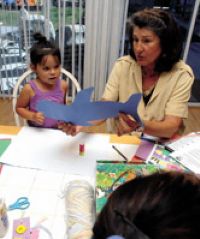 When Lisa Van Gelder enrolled in a class through Landmark Education, a program of leadership and self-improvement classes, she was focused on improving her self-expression skills. But soon she found that through helping herself, she could also help others.

The Weekly Pinnacle newspaper of Hollister, California, recently ran an extensive story regarding the self-expression and leadership program project of Lisa Van Gelder. Her project focused on Emmaus House, a shelter for abused women in their children. Gelder’s actions led to improvements at the house, and money and attention raised for a very worthy cause.

When Lisa Van Gelder enrolled in a class through Landmark Education, a program of leadership and self-improvement classes, she was focused on improving her self-expression skills. But soon she found that through helping herself, she could also help others.

“I’ve taken many courses through [Landmark,]” she said. “I was concerned about my communication with other people, having to make requests. I discovered it’s really simple to ask someone for help and make them comfortable, whether they say yes or no.” The course instructors challenged the students to come up with a project that would impact the lives of 20 people. Van Gelder had just read an article that stated domestic violence was on the rise in California, so she looked into local programs that offer support. She connected with staff at Emmaus House, a shelter for women who have been subjected to abuse, and their children.

“I just asked questions,” Van Gelder said, of her first meeting with Emmaus House manager Peggy Huffstutler. “She said one thing someone committed to was having a shed purchased, and that had fallen through.”

Van Gelder started talking to family, friends, and even approached her boss about the project.

“I decided to focus my efforts on the Emmaus House here in Hollister,” Van Gelder wrote in an e-mail. “The women who utilize the shelter’s services often come in with only the clothes on their backs, in a state of crisis and something as simple as a new pair of pajamas can offer extreme emotional comfort. I had no training in how to raise funds or get attention to what I was hoping to accomplish so it’s even more amazing what transpired.”

A friend of Van Gelder’s, Tavia Leshinsky, became a team leader on the project. Leshinsky’s mother, who lives back East, offered an annual donation.

Van Gelder’s co-workers at the window company in the Bay Area where she works supported her efforts by making donations to her cause instead of giving items to the shelter such as toiletries, sheets, towels, socks and other items.

Soon a yard sale was organized, and family and friends from outside the area had sent in donations, some pledging to offer their support on an annual basis.

“It was ideal because she came by really unexpected and she was able to chat with myself and two employees, including a case manager,” Huffstutler said. “She really wanted to expand her capacity for leadership. And we inspire people – help them find their strength. So many of [the Emmaus House clients] are recovering from addiction or a broken spirit.”

Huffstutler said one of the ways Van Gelder helped most was increasing awareness of Emmaus House.

“She was able to find these partnerships,” Huffstutler said. “We don’t have the networking and outreach that we could…A lot of times even people in our own little Hollister don’t know [about it]. She was able to network up in San Jose and the Peninsula.”

Through Van Gelder’s efforts, a shed has been installed in the yard at Emmaus House, all through donations and volunteer work. The shed is now used to store paint and other toxic chemicals that were formally kept inside the building. But in addition to the shed, Van Gelder was able to collect money for food, toys for children and the bus tokens her boss had suggested.

“She bought bus tokens for our ladies and children to get all the way to Gilroy and all over Hollister,” Huffstutler said, “allowing them to job search and get to appointments.”

Another person Van Gelder connected with Emmaus House works in a bakery, and offered to donate cakes for the clients’ birthdays.

“There is a lot more awareness with people,” Van Gelder said. “I get calls from neighbors saying they have books, toys, or new things and they want to bring them over.”

Van Gelder has even volunteered some time at the shelter, as have her 11-year-old and 17-year-old children.

“They assisted with chores, coffee,” Van Gelder said. “I have people who have committed to giving donations each year. I will continue to be involved in helping and keeping awareness out there with the need.”

In terms of ongoing needs, Huffstutler has compiled a wish-list online at www.emmaushouse.net. Food and monetary donations are always needed, as are volunteers. Several upcoming fundraisers are planned (see box on A1).

“[Van Gelder] explained to people what domestic violence is and that she wanted to really get the big picture,” Huffstutler said. “She recruited donations from all over the United States.”

For more information on Emmaus House, visit www.emmaushouse.net or call 636-7224. For the 24-hour emergency hotline, call

Aug. 15 Emmaus House car wash and yard sale at 8 a.m. at the medical offices at Sunnyslope and Memorial Drive (donations will be accepted for the sale).