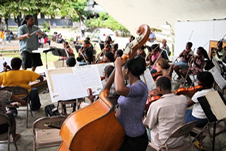 A Detroit concert is raising money to rebuild an esteemed music school in Haiti. The Haitian Network Group of Detroit (HNGD) is holding a fundraiser on Saturday, April 24, to rebuild the Holy Trinity Music School of Port-au-Prince, Haiti, that was destroyed in the January earthquake.

Landmark Education graduate Linda Munch has become involved in the fundraiser out of a chance encounter with an event organizer and her project in Landmark’s Team Management and Leadership Program, taking on running the music program at the event, fundraising and singing in the ‘Night of Classical Music’ that will raise money for the school.

The music school, founded in 1963, was an internationally acclaimed school with 1,000 students. The benefit concert will feature performers who were teachers at St. Trinity, alongside local Detroit artists.

The event also features a silent auction, whose offerings include memorabilia from the Detroit Lions. Admission to the evening comes through two tiers of tickets: regular tickets for $40, and VIP tickets for $100 which include a gourmet dinner with a taste of Haitian cuisine as well as free valet parking.

The event is taking place at the Virgil H. Carr Cultural Arts Center, 311 East Grand River, in downtown detroit, from 7 to 9 pm on Saturday. Regular or VIP tickets can be purchased through the HNGD website, which gives further event details. See also this previous Landmark Education News story about great ways to contribute to Haiti.