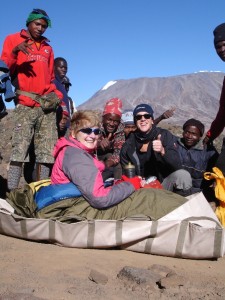 Landmark Education News received the following report from Oliva Seery, a leader of Landmark Education’s Self-Expression and Leadership Program, who at the age of 66 took on attempting to climb Mt. Kilimanjaro in Africa to raise money for Ireland’s largest children’s charity.

While leading the Self-Expression and Leadership Program in Ireland I decided ‘to push the boat out’ and undertake a community project which would not only challenge me in many different ways but, in addition would benefit the children of Ireland. The theme was ‘Community and Contribution’.

Titled ‘Back to Africa for Ireland’s Children’, the aim was to raise €5,000 for Barnardos Children’s Charity and for me to climb Kilimanjaro, Africa’s highest mountain.

I had lived in the Zambian bush from 1971 to 1974 where I taught in a boarding secondary school for girls but it was when on safari in Kenya in 1982 that I almost saw Kilimanjaro, I say almost as it was then masked by clouds.

Although I had seen various participants in the programmes which I led raise many thousands of euros for various charities, for me it would demand a breakthrough as, at an early age, I had vowed to never ask or expect anything from anybody.

I designed the project designed and set up three major fundraising events. The first was a 10K run from my tennis club, then a cake sale at my local church, followed by a table quiz in the village pub. Finally, my local supermarket placed Barnardos buckets at the checkouts for 1 ½ weeks.

To date we have raised €5,025 and what impressed me was the extraordinary generosity of the people around me with their time and money from the tennis club, running club, church, village, local businesses and my many Landmark graduate friends, and this at a time of scarce resources. Now the climb: I come from the Irish Midlands which are completely flat and I live in a bungalow hence my hamstrings would invariably scream at the slightest incline. I continued to run 10K races but also did extra training, including running up hills, yoga and gym work – coupled with several hikes, this became my training over the three months.

With equipment bought or borrowed I set off with my new friends from Dublin Airport on September 8th. (By the way this was the first time I ever wore a rucksack!).

Forty eight hours later, we arrived at our Tanzanian Hotel from where all 18 of us set off early the following morning having been thoroughly briefed by the Tour Organiser and our Trek Doctor who made no bones about the potential devastating effects of  altitude sickness.

At Nalemoru Gate, we were astonished to see the number of porters, kitchen staff etc who would be taking care of us for the duration of our trek. They were 27 in total and between them they would carry our large rucksacks (max 15Kg), tents, tables, chairs and all the food up the mountain, always ahead of us so we would be greeted by our already pitched tents and a welcome hot meal.

I walked with the group for 16hrs over thee days as far as Mawenzi Tarn Camp, to an altitude of 4330m at which point it was evident that I would go no further as I had symptoms of altitude sickness and severe de-hydration which required two intravenous drips right there in my tent.

The decision was made that I would be taken down the mountain on a ‘soft’ stretcher ably carried by a team of 10 guides and accompanied by the team Doctor. They were an amazing group of guys chatting away happily in Swahili all the time. After 4 to 5 hours we were met by the official mountain rescue team who had a metal trolley, this time on wheels. My head bounced like a football as they ran down the mountain until I devised a way to hold my head still with my hands. Either way, I envisaged a visit to my chiropracter on my return home.

Haji from our team stayed with me throughout and when I asked how much I should give the team as a tip in gratitude, he simply said ‘its not important at all what you give. What matters is you give from the heart!’ This really moved me especially as I was aware that these guys work really hard for a basic income which goes to support their families.

I have absolutely no regrets for not having reached the summit, all but two of us went all the way, the oldest (me) and the youngest.

I certainly got community and contribution in a way I have never before experienced and am so grateful to all concerned.