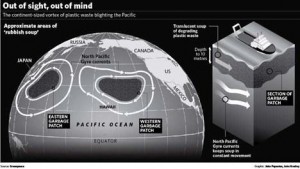 Miche Walsh is using her Landmark Education training to take on the largest floating garbage patch in the Pacific Ocean. Landmark Education graduate Miche Walsh was recently featured in Vision Magazine for her work in creating a 501c3 non-profit to promote environmental sustainability and to clean up the largest floating garbage patch in the Pacific Ocean.

Walsh’s 501c3, Act Globally, Think Universally (AGTU) launched the GP2 project in March 2009. The project’s goal is cause a partnership that cleans up the Great Pacific Garbage Patch, and creates a replicable model to do the same for the other huge ocean garbage patches.

However, Walsh’s research led to a partnership with a robotics developer that is creating an ocean sweeper that can be deployed from ships to make plastic come to the ocean surface. The collected debris can then be converted into productive uses.

The first expedition to the patch is scheduled to begin on March 22 and run through the middle of April. The GP2 project is working to raise millions of dollars and is creating partnerships with many different environmental groups to ensure the project’s success.

Read the entire Vision Magazine article, which credits Landmark Education as a key influence on Walsh in her quest to make a difference with these issues. Vision Magazine is published in the Western United States with the goal of creating a more sustainable world.