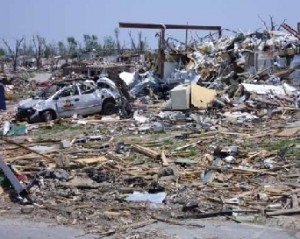 One Landmark Forum graduate's story about helping to clean up Joplin in the wake of the hurricane that devastated the city comes to us via Chicago Breeze. Landmark Education News received a report about the efforts of Landmark Forum graduate Mike Machalek, who in the wake of the devastation caused by a tornado that destroyed much of Joplin, Missouri on May 22nd, volunteered with cleanup efforts run by the Army Corps of Engineer. This story comes from the USACE publication Chicago Breeze.

Machalek volunteers in an emergency–again

In Missouri, the Corps is providing support to Joplin, Mo., following a series of tornadoes that occurred on May 22, 2011. Public Law 84-99, Flood Control and Coastal Emergency Act, gives USACE specific authorities to conduct preparedness, response, recovery, and rehabilitation activities. As of July 28, debris removal teams removed more than 1.5 million cubic yards of debris. And Mike Machalek, West Permits and Enforcement Section, was part of that team.

It’s not very often that a wig gives you and a group of emergency responders a scare. That’s what happened a few weeks ago while Mike Machalek, West Permits and Enforcement Section, worked as a quality assurance inspector in Joplin, Miss.

“As an inspector, I monitored the contractors as they removed either vegetation or construction/ demolition (C&D) debris,” Machalek said. “One afternoon, a contractor noticed hair in the debris and everything stopped. Police and Emergency personnel were called and it was later discovered that it was just a wig.”

Also found in the debris throughout the mission were guns, ammunition, wallets, money, financial records, and [early on] body parts.

“The Corps’ GIS Team showed us a visual display of how much debris we removed during the first month,” Machalek said, “and it was 1 million cubic yards—enough to fill Soldier Field completely and form a pile over 500 feet tall! I’ll never forget that.”

Another thing he said he’ll never forget is the heat. He worked from 7 a.m. to 7 p.m. seven days a week in 100-degree temperatures with no shade.

His day began at 7 a.m. when he would join Phillips & Jordan, the main contractor, at its morning safety briefing. As a QA inspector, he had to make sure that the debris was separated so U.S. EPA could take away the white goods (stoves, refrigerators, washers, dryers) , the electronic goods (TVs, stereos), and household hazardous waste (paint cans, oil, radiator fluid).

Then the Corps would have the sub-contractors separate C&D, vegetation, and miscellaneous metal. It was up to the QAs to make sure that only vegetation and/or C&D was loaded and that everyone stayed in the right of way. Later on, the Corps, through the City of Joplin, obtained rights of entry to go onto peoples’ property to clear it. So the QAs also had to make sure that the contractor didn’t demolish what was left of the home and that all household hazardous waste was picked out of the debris and all metal was placed in a pile for recycling.

At 7 p.m., Machalek would meet at the Corps’ Recovery Field Office for a lessons-learned meeting. And at about 9 p.m., he’d call it a day.

He said he volunteered because he likes the challenge.

“I always volunteer,” he said. “I’ve been involved with disaster relief with the Corps for years – like the West Virginia floods and Florida hurricanes. I like the challenge of the mission and helping out those who have lost everything. And it brings a good break from my normal duties and opens up my eyes to appreciate everything that I have.”

Machalek said many of the flaggers and quality control inspectors aka QCs (hired by Phillips & Jordan) were from Joplin. So, for them, it was very important to be a part of the cleanup effort.

“The one thing that really stood out for me was how much the
contractors wanted to work,” he said. “They didn’t waste a lot of
time or play games.”

Machalek didn’t waste any time going back either. From Aug. 9 to
17, he went to Tuscaloosa, Ala., on a “white shirt” mission. Meaning that he was in an office working with the city on rights of entry for the Housing Demolition Mission,as well as the continuing debris removal mission.

“I enjoy the work,” he said. “I enjoy being outside—even though
it’s hot. I like watching something get accomplished. It’s like night and day from the time I started to the day I left. I also like working with the contractors; they’re just regular people, and a lot of them lost their homes. They were very determined to clean the neighborhood up. A lot of homeowners thanked us for what we did. And that’s why I went back.”