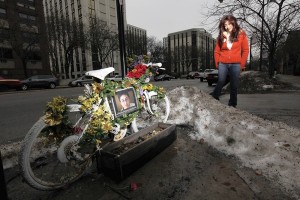 A Landmark Forum graduate whose son was killed in a 'dooring' car-bicycle accident is working to have her state recognize and address this overlooked traffic safety issue. Landmark Forum graduate Kim Nishimoto was recently featured in The Chicago Tribune for her efforts to bring attention to the most common kind of car-bicycle accident – dooring, where a door of a parked car is opened in front of an oncoming bicycle. Nishimoto’s son Clinton Miceli was killed in a dooring accident in 2008, and she is working to have the Illinois Department of Transportation include dooring in its accident statistics. Until it is included, traffic safety funding won’t go towards preventing these commonly occurring accidents. Read the whole story from The Chicago Tribune.