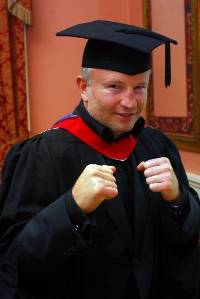 former boxing champion billy schwer saw in the landmark forum that he wanted to make a difference for kids.

In a recent article in the Beford Today newspaper, former world boxing champion Billy Schwer discusses how he has taken on making a difference in the lives of young people through a foundation designed to support and motivate them in having their dreams come true. In the same article, Schwer describes how he was depressed and purposeless after his boxing career ended until he completed The Landmark Forum, and saw that he could create a new life making a difference for others.

He formed the Billy Schwer foundation along with his business partner, through which he has been giving motivational speeches in British schools. He has become involved in other programs for young people such as the Extended Schools Programme. He is also becoming an ambassador for Keech Hospice care.

Schwer has now written his first book, The Science of Success. In all his work, Schwer aims to contribute the lessons he learned through boxing about what it takes to succeed in life. As for The Landmark Forum, Schwer says it was there that he saw how contributing to people could be his real purpose and help pull him out of the rut he’d been in since his retirement.

“They teach ontolgy – the art and science of being,” Schwer said about Landmark.” And that gave me access to what I’m doing now. I feel so happy and fulfilled to be actually making a difference to people.”

Read the whole article, which includes a video of Schwer talking about his “mental boxing workout”, at the Bedford Today website.