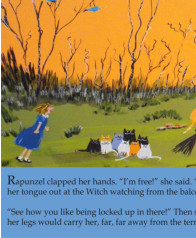 Landmark graduates have created a unique story form, visual tales which help both children who can hear and those who can't to expand their language. When you speak with Laurie Meyer, the passion and commitment she feels for the deaf and hearing impaired community is apparent. By trade, she is a hearing American Sign Language (ASL) interpreter with the goal of making a huge difference for hearing impaired children who are discovering the wonders of language.

Having recently moved to Portland and knowing no one, on New Year’s Eve in 2004 she went to an event where she heard there would be members of the deaf community. That’s where she met Pinky Aiello. Being deaf from birth, Pinky grew up hating hearing people. From well meaning parents, she was not given ASL and so started life out angry and frustrated at not being able to communicate well. In 2007, Laurie registered Pinky and her friend, Alisha Bronk, into The Landmark Forum. According to Pinky and Alisha, they not only got the concept of “Empty and Meaningless” in The Landmark Forum, they really got that “hearing people don’t intentionally misunderstand deaf people; they just don’t understand our language.”

Shortly after that, out of Laurie’s Team, Management, and Leadership Program project and with the collaboration of both Pinky and Alisha, the idea for ASL Tales was born.  Pinky said “One of the things that inspired me about creating ASL Tales was to help hearing people understand us better.”

ASL Tales are Video books, starring Pinky, using ASL that come complete with paper books to read along with. They tell popular children’s stories, such as Rapunzel and The Princess and the Pea, in a format that gives young children visual, spatial awareness and leaves them able to think in three dimensions.

Laurie feels that hearing people are being taught Sign Language in such a way as to not make them understand deaf children better. She says well meaning and well educated people are teaching incorrect information about a society to hearing children, and they say to her all the time, “we just want something basic that can expose kids to the deaf community language and culture”. According to Laurie, it is not happening.

She says that initially it was thought if you taught hearing people ASL vocabulary, they will respect deaf people more, but she believes it has become the worst thing that could happen to American Sign language, because most ASL programs teach wrong information about how the language works. They teach that ASL is ‘words’, when in fact it is actually concepts.

If you look at ASL Tales, it is storytelling but it is also language. Laurie says she speaks several different languages and when they are taught to kids, they are done by telling stories. You could study all day long learning vocabulary in any language and not learn anything about the language. But unlike learning a language like French, which you know sounds different, people learning ASL have no idea whether they are saying something right or not. While other books on Sign Language are two dimensional, ASL Tales is fully three dimensional, since each book comes with a video meant to be watched at the same time the book is being read.

“However”, Laurie says, “ASL Tales are not simply for deaf kids. They are also for hearing children. In fact, they are for everybody. Our goal is to make books so good that every child born will have a neighbor, classmate, or friend who has seen ASL Tales.

What has happened for many deaf people is that, like Pinky, their lack of understanding the hearing world has created a lot of anger and angst. Their way of getting hearing people to understand them has often not been moving or inspiring. Laurie said her team of about 60 volunteers got this, and decided to see if they could truly inspire hearing people to understand deaf people in any way.

Initially the project was about deaf people, but in the process what they discovered was it is about all kids. This is partly the case because ASL gives much more communication detail than English does. For example, in the Rapunzel book, the English words say “he traveled north to find a princess but she did not like warm weather.”  The ASL version of the same words says “He went north. He got cold; he looked for a princess. He saw her. He watched her go by. He fell in love. He invited her to come home with him. She said ‘No, I like it here where it is cold.’ He got disappointed and he went home.”

In the way ASL is traditionally taught, with individual words instead of concepts, much of this rich text would have been missed. The three dimensional visualization would have been missed. ASL Tales gives children the complete picture which not only fleshes out the story, but brings the imagination alive. In the cases of children who have developmental issues, thinking in three dimensions can be another way to give improve their communication skills, or at the very least improve their comprehension skills.

Laurie says you can get the story being told even if you do not speak English, so it is another way for parents to read with their kids. We know that when parents read with their kids, they grow up to have greater literacy skills. For kids with learning challenges, many of them simply don’t connect the meaning of words to the word itself, therefore they read one word as a time with little or no comprehension.  Laurie says ASL Tales go a long way to bridge that gap also and let these kids visualize what the word is.  For instance, when they say ‘rabbit,’ the picture of a rabbit pops into their heads. She sees tremendous learning possibilities if every child had kinesthetic, visual tactile, visual learning. To fulfill this, ASL Tales has so far been translated into ten different languages.

Landmark’s idea that “the world is created in Language” is right in line with ASL Tale’s ideas about this project. After all, you would not know the sky was blue if you did not learn that not only is that what the color is called, but you could look at it to see the blue color at the same time.

Laurie says that in mainstream deaf education, kids have to fail badly before they get to learn sign language. This was evident in Pinky’s case. She says that what creates language and allows us to learn it is a desire for communication. The reason people develop language is because there is a pull or need to communicate. What we do with those deaf children who don’t seem to learn language well is that we wait until after their critical language development period, and then we put them with people who don’t sign correctly, and they are never ever exposed to the full richness of the language.

ASL Tales give them pictures in addition to signs because kids that learn just signs never really learn to say very much. Laurie says in her opinion the reason these kids who are taught just signs don’t communicate very much is because they never really get the concept of language as a whole; they only understand individual words. Most times when English speakers learn ASL, they think the syntax of the language is the same. In fact, it is not. ASL Tales bridges the gap in the kids who simply are not learning language.

Through ASL Tales, Laurie is giving not only the deaf community a way to communicate, but she is also giving the hearing community a way to communicate with the deaf community. When she tells people about ASL Tales, she generally does not say this is a program for deaf people because it was created on universal concepts for everyone, but underneath it all, her hope is to transform communication for deaf people. Her frustration is that when book stores buy the program, they put it on the disability shelf. The challenge is how to get the hearing community to embrace this program as just another educational tool.

The fact that it works for gifted kids, ESL kids, ASL kids, autistic kids, normal kids, immigrant refugee kids, etc., creates an opportunity for everybody to talk to everybody. An ASL Kid can actually have a conversation with a special needs kid or a gifted kid or anyone. She says the more ways and things that get our children’s brains to fire, the better. In English we would not say “we are not going to teach them colors since we already taught them letters”, but in some cases, it is actually what happens and why some children just don’t get language.

A young child playing with her doll and dressed up as a fairy princess has the entire scenario playing out richly in her own head, but often she cannot put it and her world into language. ASL and ASL Tales create something alive in your head that can be externally communicated.

When asked what Laurie’s goals were for ASL Tales, she said, “I’m really shooting for nothing less than national books awards, Oprah, and every library in the country. I have a lot of goals. That beautiful ASL will be highly valued by hearing kids and their grownups, so that when their cousin, kid down the street, or friend’s sibling ends up with a deaf baby in their family, it’s going to seem ridiculous to everyone around those parents if someone suggests that the deaf kid is the only one in the neighborhood who doesn’t get to see ASL. Those kids may still have cochlear implants and have an oral education, but they’ll get these books because it’ll be like ‘Of course you’d let deaf kids see it when everyone else does.’  Who would deny a kid Dr. Seuss?  They wouldn’t.  Our books are going to be that good. What I bring is the intention of transforming the hearing world’s understanding of ASL so that ultimately it makes a better clearing for ASL to be available for Deaf children. Instead of swimming against the tide, it’s creating a new tide.”

Pinky, who is the acting ‘star’ in ASL Tales, says she wants the hearing community to check with the deaf community about Sign Language. She says when projects by well funded companies are so successful teaching everyone that ASL is signs for English words, then it doesn’t leave room for people to really understand ASL.

She said her experience as a child of being denied access to ASL by well meaning hearing people made her mad at the whole hearing world. “I don’t want other deaf children to have that experience.  Through Landmark, I learned how to listen to hearing people better. I hope Landmark and ASL Tales can help hearing people listen better to me.”

Laurie can cite truly inspiring stories about children with little or no previous language skills, who find ways to communicate after seeing her video books. One recent reader of ASL Tales said recently:

“Your team is changing the world one person at a time – what you’ve done for me could be for communication for all kids. It will be a ripple effect.”