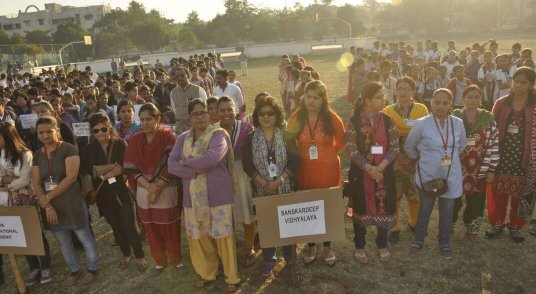 Landmark Forum graduate Mohini Makadia is cleaning up the Indian city of Ankleshwar, causing awareness, cleaning projects, and permanent structures such as a waste plant and trash cans. Ankleshwar Cleanathon was a project taken up by a Landmark Forum graduate, Mohini Makadia, as an effort to create a sense of ownership in the minds of the local residents. She lived in London for almost six years, and after coming back to India, she realized that everyone litters around and points fingers at others. Her idea was to educate the residents about the importance and advantages of cleanliness, and was highly inspired by the ‘Swacch Bharat Abhiyan’, the national government campaign to clean India. With more than 1,350 participants and nine managers, Mohini lead the Ankleshwar Cleanathon on 27th of November 2016 at the Ankleshwar Sports Ground, Gujrat, India. This project was divided into three main parts, which included: creating awareness, launching the cleanathon and installing the waste plant setup. A number of children from 14 different schools participated in four teams and cleaned about 8 kilometres of the road. Many NGOs, the Ankleshwar Industrial Association, Landmark Forum graduates, the Reliance Club, JCI, Rotary clubs, as well as the government authorities, participated in this project. They had five media personnel from different channels and newspapers who covered the event. They also had to set up a committee of 50 members to manage the crowd. She now intends to take this forward and work towards the installation of dustbins and setup a waste plant for waste segregation management.

Lastly, she gave all the credit to the Landmark Forum and mentioned that on the first day of the project, all of this seemed to be impossible! But after the Landmark Self-Expression and Leadership Program, she overcame self-doubt and gained confidence. Now she is creating a difference in peoples’ lives and spreading the word of cleanliness.