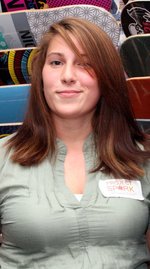 The staff of Landmark Education News has come across a news article in the Staten Island Advance of New York State which discusses the Self-Expression and Leadership Program project of 15-year old Juliane Forsyth.

The staff of Landmark Education News has come across a news article in the Staten Island Advance of New York State which discusses the Self-Expression and Leadership Program project of 15-year old Juliane Forsyth. In the Landmark Education program, she began to assemble a community effort to create a skateboard park in Staten Island. Here is the article.

If one local teen has her way Staten Island skateboarders will get an indoor site for nosegrinding, kickturning and heelflipping in the West Shore.

Juliane Forsyth, a 15-year-old Sea View resident, has founded a grassroots movement that she hopes will rally enough support in the borough for her to present a detailed request to the city Parks Department by summer’s end.

Called Project Spark — “spark” is “park” with an “s” for skateboard — the proposal calls for an indoor structure created exclusively as a weather-proof skatepark on un-utilized park land in Sea View.

“I really believe this is an important thing for the [youth] on Staten Island,” said Ms. Forsyth. “Skating is the fourth most popular sport in the United States. Here on Staten Island, you see plenty of parks designed for baseball, basketball and soccer, but very little for skateboarders.”

She feels that an unfair stigma has been attached to the sport, even with events like the X-Games bringing it a bit closer to the mainstream.

“We’re not troublemakers,” she said. “We’re not trying to skate on sidewalks and in front of stores. We do it because there isn’t anywhere else to go.”

The project stems from a specialized Manhattan program that Ms. Forsyth — set to enter her junior year at Susan Wagner High School after being skipped a grade in her younger years — has been participating in.

The Landmark Education curriculum focuses on three separate aspects of a person’s life: Yourself, others and community.

This project would be stage three for the local go-getter.

At a rally at CD Skateshop on Victory Boulevard last week, more than 30 local teens were on hand to learn about how they could help.

“The most important thing is that we have a strength in numbers,” said Ms. Forsyth to the group. “There are more than 300 skaters on Staten Island that would use this facility, and if we stick together, we can do this. If you go to the city with just 10 people behind you, they’re going to brush you off because they won’t realize it’s important.”

She asked the attendees to pass out flyers and stickers, to recruit signatures for the petition and to attend local community board and civic group meetings.

Additionally, Project Spark is planning an all-day fund-raiser for late July or early August at the Ben Soto Skate Park in South Beach that would feature a demo and a concert.

“I’m used to people saying that something can’t be done, and then doing it,” said Ms. Forsyth. “I grew up hearing, ‘Girls don’t skate.’ And it took me three years before I realized that I could. But then I did.”

In fact, she hopes to base her future on the peripherals that go with skating.

“I have a scholarship to study fashion in the [United Kingdom] for college,” she said. “And what I’d really love to do is create a specific clothing line for skaters.”

But before she heads overseas, Ms. Forsyth hopes to do some good here at home.

“I can’t see Staten Island without this indoor park,” she said. “This would make a huge difference in the community for everyone. It isn’t just ‘my’ project. It’s ‘our’ project.”
Additional information about Project Spark, including specific dates for events and fund-raisers, can be found at www.projectspark.weebly.com. For specific questions, e-mail [email protected]